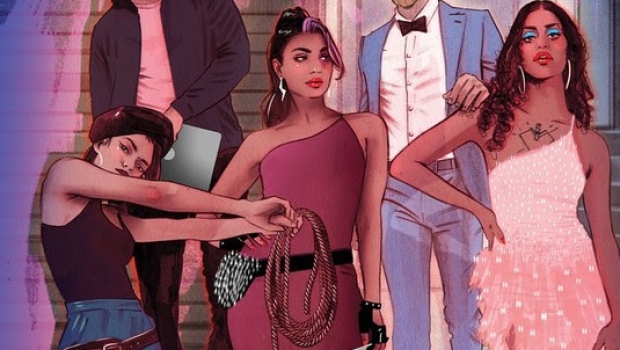 For SfSx, a jailbreak heist action-adventure, skills like bondage and pole dancing are about to become quite useful

From notorious kink writer Tina Horn (Why Are People Into That?! podcast) and featuring a diverse group of artists, comes SfSx (Safe Sex), Vol. 1: Protection, a social thriller about sex, love, and torture. This first volume in the critically acclaimed, ongoing Image Comics series, will collect issues #1-7 into trade paperback this July.

Set in a draconian America where sexuality is strictly bureaucratized and policed, SfSx follows a group of queer sex workers trying to keep the magic alive in an underground club called the Dirty Mind. Using their unique talents for bondage and seduction, they resolve to infiltrate the mysterious government Pleasure Center, free their incarcerated friends, and fight the power!

Best described as Sex Criminals by way of Gilead, Publishers Weekly said of it: “readers with a yen for third-wave feminist fury will find plenty to enjoy in these porn-friendly adventures.”

Fans of Hustlers and Sunstone won’t want to miss out on this hot new series.

SfSx (Safe Sex), Vol. 1: Protection (ISBN: 978-1-5343-1585-3, Diamond Code MAR200113) will be available on Wednesday, July 22 and in bookstores on Tuesday, July 28. It can be pre-ordered at your local comic book shop or independent bookstore via Bookshop or IndieBound, or it can be pre-ordered on Amazon, Barnes & Noble, Books-a-Million, and Indigo.

“In Tina Horn’s racy sci-fi thriller, sex workers are the heroes we always needed. It asks us: What does society look like when sexuality is policed and monitored with the full weight of a fascist dragnet?” —Playboy

“Part-thriller, part-political statement and unlike anything else in contemporary comics. Handmaid’s Tale, 1984, and Vonnegut, all filtered through the sensibilities of queer punk with an antagonist that feels at once entirely prescient and also utterly chilling.” —The Hollywood Reporter

“For SfSx, a jailbreak heist action-adventure, skills like bondage and pole dancing are about to become quite useful.” —Rolling Stone

“The action-filled story of an anti-sex dystopia, but with heart. NSFW as heck.” —Polygon

“A celebration of the way queer people, sex workers, and other sexual outsiders are always at the forefront of advancing our cultural ideas about sex and pleasure.” —Teen Vogue

“SfSx zeroes in on the dystopian, anti-sex nightmare we seem to be hurtling towards. Visceral, arousing, and terrifying. Tina Horn’s writing gave me goosebumps, wishing I could visit The Dirty Mind, and fearing that we’ll soon live in a future where such a place is no longer possible.” —Stoya

“SfSx shoves its sparkly stiletto heel right in the face of anyone who has ever tried to keep sex workers down. Tina Horn’s work reminds us how important sexual freedom is to the American spirit.” —Stormy Daniels

“Horn has shown herself to be a writer who has taken to comics incredibly well, adept at both writing visually but also has brilliant dense prose and dialogue which contribute to incredibly vivid worldbuilding.” —Comics Beat