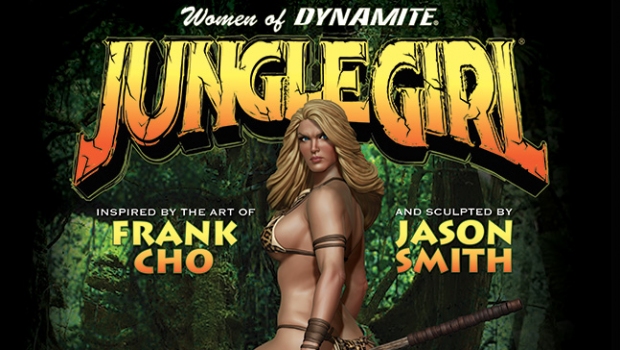 Dynamite Entertainment is proud to expand its merchandising program with the Jungle Girl Statue, the third in its line of porcelain Women of Dynamite statues. Produced as part of their announced creative partnership with merchandise development company The Brewing Factory, the statue is slated for release in late October and features Jana, the heroine of the Jungle Girl comic book series by industry sensation Frank Cho (Savage Wolverine, Mighty Avengers, Liberty Meadows). 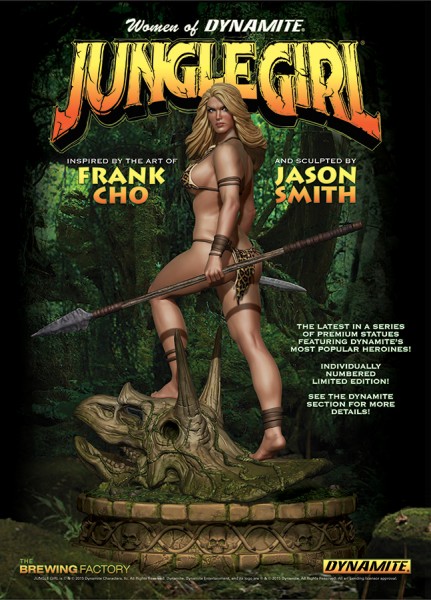 Based on the Cho’s distinctive art and sculpted by the ever-talented Jason Smith, the blonde warrior stands atop the skeletal remains of a triceratops. Hand-painted on cold-cast porcelain, the Jungle Girl statue stands approximately 12″ in height with a 6″ base, with each individually numbered as part of a Limited Edition run. This Women of Dynamite statue comes packaged in a four-color box with a hand-numbered Certificate of Authenticity.

Georg Brewer, founder of The Brewing Company, says, “I couldn’t have been more excited when I heard that we were adding Cho’s Jungle Girl to the Women of Dynamite line. She is a great character and visually very different in tone and physicality to our previous statues. Jason did fantastic work translating Frank’s style in 3D. It’s one of my favorites in the line.”

Dynamite Entertainment first announced the Women of Dynamite line of statues in February 2015. The first release in the line features Vampirella, the iconic comic book heroine and horror hostess whose likeness in porcelain is based on art from superstar illustrator J. Scott Campbell (Danger Girl, Gen13). Purgatori, the Egyptian vampire goddess popularized in Chaos! Comics titles, is the second Women of Dynamite statue, based on art from the legendary Michael Turner (Witchblade, Fathom). Each of these three statues has been sculpted by Jason Smith.

The Women of Dynamite: Jungle Girl Statue will be solicited in an upcoming edition of Diamond Comic Distributors’ Previews catalog, the premier source of merchandise for the comic book specialty market. Comic book fans are encouraged to reserve the statue with their local comic book retailers. The Women of Dynamite: Jungle Girl Statue will also be available for individual customer purchase through digital platforms courtesy of Comixology, Dynamite Digital, iVerse, and Dark Horse Digital. Fans and retailers are encouraged to follow Dynamite Entertainment’s official social media channels for the latest updates regarding project development and release dates.