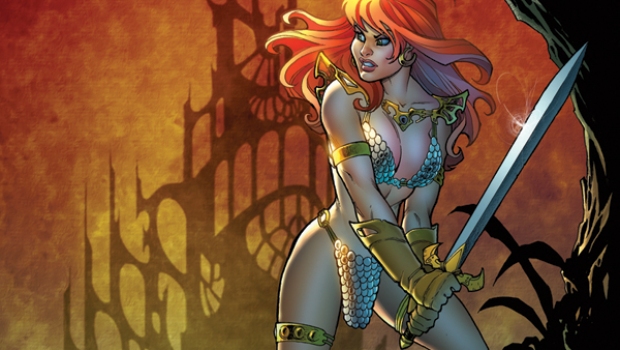 In Red Sonja: The Black Tower #1, the question is posed; what is the Black Tower? What startling mysteries does it contain within its walls? And most shockingly…how will its very existence cause the death of Red Sonja?!

“Simply put, THE BLACK TOWER is an old fashioned mystery-and as we all know, everybody loves a mystery,” says writer Frank Tieri. “In fact, I’d say at times, this story is more in line with a Stephen King story than your typical Sonja tale. The Tower just appears out of nowhere one day-nobody knows why, nobody knows how. People are scared, they’re confused-and they start turning on each other. That’s when Red Sonja enters the picture. And what she finds is mystery that will span decades, which will pit people against each other, that will cost many lives… including her own. Now, I think that’s a story fans will want to see how it turns out, don’t you? I like that she’s this total bad ass-that she’s the WOLVERINE of her world, that she’s The Man With No Name– but she’s also a woman. Because you don’t often see that. You don’t often see it being a woman that walks into a bar and everybody tenses up, everybody pees their pants. And in Sonja’s case, if you underestimate her, if you just dismiss her as ‘just a woman’-she’s going to make you pay for it. And then some.”

“Gail Simone’s Red Sonja series has received so many accolades, we have been very selective about our Red Sonja series or specials,” adds Dynamite CEO / Publisher Nick Barrucci. “But when Frank pitched this mini-series to me, I knew that this would be a perfect stand-alone mini-series. And having Amanda on covers is icing on the cake!”