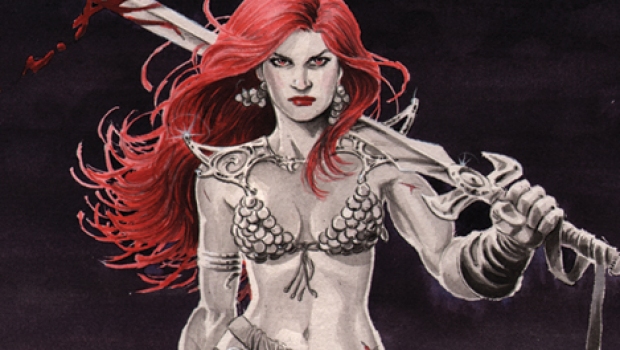 Dynamite’s relaunch of Red Sonja with writer Gail Simone will arrive this coming July will be supported by covers by some of the most distinguished female artists in comics. Red Sonja #1 contains covers by Nicola Scott, Colleen Doran, Jenny Frison, Stephanie Buscema, Fiona Staples, and Amanda Conner! Fans will definitely want to pick up Gail Simone’s Red Sonja #1 this July!

In Red Sonja #1, Red Sonja gets a fresh new attitude Sonja pays back a blood debt owed to the one man who has gained her respect, even if it means leading a doomed army to their certain deaths! You do NOT want to miss this re-introduction the She-devil with a Sword!

“Red Sonja is one of the original female ass-kickers in comics, of COURSE I would want to write her,” says writer Gail Simone. “Any reader who likes sex, blood, swordplay, sassiness, red hair, adventure, and monsters getting stabbed in the face should get this book.”

To celebrate the bold new direction of one of comics’ most iconic female characters, Red Sonja #1 will feature a wide selection of variant covers by some of the leading ladies in the industry, including Nicola Scott, Amanda Conner, FionaStaples, Jenny Frison, Colleen Doran, and Stephanie Buscema.

“I had this idea to ask the top female artists in the industry to do the covers and Dynamite ran with it beyond my dreams, says Simone. “Not only did all the artists we asked immediately agree, they all confessed their secret love for Sonja. They adore her! Lots of the artists submitted multiple sketches because they couldn’t stop, and many top names submitted sketches without even being asked, they love Sonja so much, and are dying to see this project.”

Red Sonja, the She-Devil with a Sword, is a fictional character, a high-fantasy sword and sorcery heroine created by Robert E. Howard, and adapted for comics by Roy Thomas and Barry Windsor-Smith. She first appeared in Conan the Barbarian #23 (Marvel Comics). Red Sonja has become the archetypical example of the fantasy figure of a fierce and stunningly beautiful female barbarian who typically wears armor resembling a bikini or lingerie. For nearly a decade, Sonja has had many successful series with Dynamite Entertainment, and she now appears monthly, as well as in mini-series and one-shots, all published by Dynamite Entertainment.