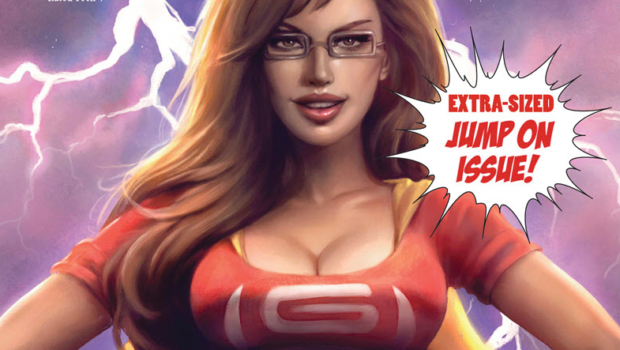 Feeling guilty, Summer filled in as Geek-Girl, but didn’t have the propensity for it that Ruby had… Ruby came out of her coma, but – having nearly died – didn’t have any plans to return to fighting crime. However, she’s been made an offer she can’t refuse…

Johnson brings us up to speed: “Before Ruby took her down, Lightning Storm did a lot of damage to law enforcement in Maine, leaving it badly undermanned – and a new bunch of villains, The League of Larcenists, emerged.” Johnson continues, “The League of Larcenists are a quirky bunch of villains lead by Pig Head – a guy whose brain has been fused with a pig’s; the crew are packing serious tech, including blasters and a teleporter, and are pulling bank jobs, gaining a reputation and growing in number. And they’re not the only ones capitalizing on the hole that’s been left in law enforcement, crime is rife… What’s a back-from-a-coma girl with super-power-inducing tech glasses to do…?”

The answer to that lies is the Geek-Girl: Crime War TPB, collecting the first four issues of the ongoing Geek-Girl series – and Ruby comes out of this having been thrown a lifeline back to her old life…

Johnson fills us in, “The Crime War arc introduces us to Johnny Carlyle, a weapons runner of dubious morality who gets a wake up call that prompts him to start a new venture – bankrolling a super-team, headed by Geek-Girl!” Johnson continues, “Though reluctant to return to super-heroics, this is an offer Ruby can’t really say no to, as the pay from it will allow her to go back to college and retake what she missed out on while in her coma. Ruby’s thinking she’ll take this gig, then hang up the cape for good and go back to her life as a college PR student.” “However,” Johnson continues, “I like to keep the Geek-Girl comic unpredictable, and now we’ve gone ongoing, I have some more ‘out-there’ creations to throw into the mix. Things are gonna get weird for Ruby.”

Written by Johnson, illustrated by Carlos Granda, colored by Chunlin Zhao, and published by Markosia, Geek-Girl: Crime War TPB (collecting the 4-issue Crime War arc) and the new Geek-Girl #5 are available to Pre-Order now on Kickstarter, via www.geekgirlcomics.com, but only until June 30!