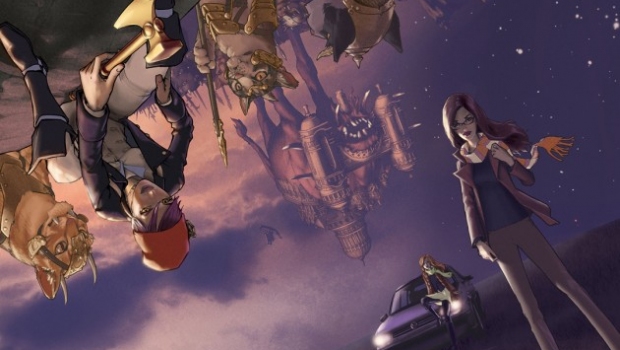 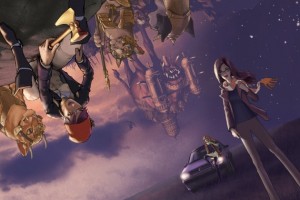 C4S was made aware of this project via Doomrocket, followed by some amazing preview pages exclusive to Comicsalliance and the stunning news CBR announced that MAE will also be available via Dark Horse Comics!

In addition to the main story, the Mae graphic novel will feature an introduction by Bill Willingham, a behind the scenes look at concept art and production, and a bonus “Sunday comic strip” story.

Once upon a time in Indiana… a 13 year-old girl named Abbie Fortell disappeared. Her younger sister, Mae was left behind to finish school, take care of her ailing father, and build a life without her sister. Eight years later Abbie has returned, claiming she’s found a doorway to a world of adventure and monsters. These tales are hard to believe — at least until the monsters show up too…

Mae is the start of a new and different phenomena. It’s a lavishly produced adventure tale with two strong female leads, made for a wide audience: young adult as well as older readers of both genders. We know that there are many readers out there who can appreciate story and art without needing grim, gritty violence, and sex. Let’s prove to the world that there’s room for original creations like Mae. The Comic Book medium is big enough for all of our dreams and stories.

Gene Ha. Best known as the Eisner Award winning artist on Alan Moore’s Top 10. He once heroically avoided a street fight by yelling so loudly the other guy fell on his ass… true story. For more info about Gene, visit GeneHa.com

Anette Nam. Mother, wife, and all around super-heroine by day; graphic designer by night. She lives in Michigan, but was born and raised in Sweden…and we all know Swedish design rocks! Visit anettenamdesign.com to view her creations.