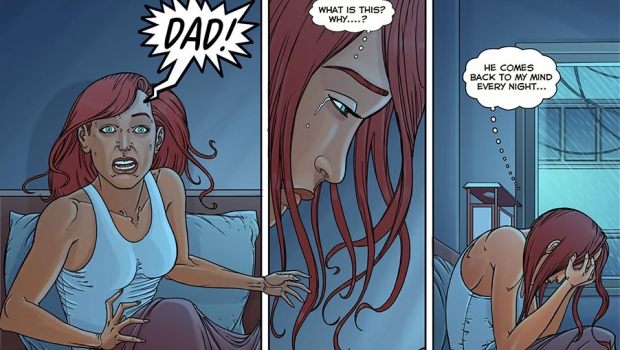 This week I’m going to share with you the first ten pages of Karl Vincent: Vampire Hunter Dracula Rising # 2 from my brand-new artist Rodolfo Ezequiel. That will be the end of the free peek, you’ll have to buy the issue (it’ll be available on line) to get the rest when it comes out. Just to keep you up on what’s going on I’ll give you a brief overview of Dracula Rising # 1:

1) Karl is having nightmares about his uncle Steven Vincent. Steven disappeared on Christmas Eve 1975, exactly one year after his wife was killed. Were vampires involved in Steven’s disappearance?

2) Karl is visited by a mysterious lady who calls herself Dominique Alexander who is seeking his help to take down a vampire (in true noir style.) Karl follows her to the cemetery.

3) We jump to Karl waking up in his office, he passed out and can’t remember what happened, but his arm is bandaged, blood has been drawn from him while he was passed out.

4) Karl is visited by the time traveling​ Athanasius (Nathan) Timon, Athena’s father (Last Rites: The Return of Sebastian Vasilis.) Who tells Karl what happened (I don’t want to give away everything here, suffice to say that the lady that visited Karl wasn’t Dominque Alexander.)

5) Nathan tells Karl that he must obtain the Equality Crystals before Dracula obtains them for the Equality Equinox.

Without giving away too much that’s a nutshell on issue one. Issue # 1 has a different artist, Dennis Magnant, who had to leave the project. (available on Indyplanet, the B/W version is free digitally, color version is .99)

So now we come to issue #2. Here are the first ten pages. Minus the cover and splash page which aren’t finished yet. You can find all things Karl Vincent: Vampire Hunter on amazon, Indyplanet, Drive Thru Comics and Kindle.

Tags: given to me, karl vincent, kevin given, Rodolfo Ezequiel