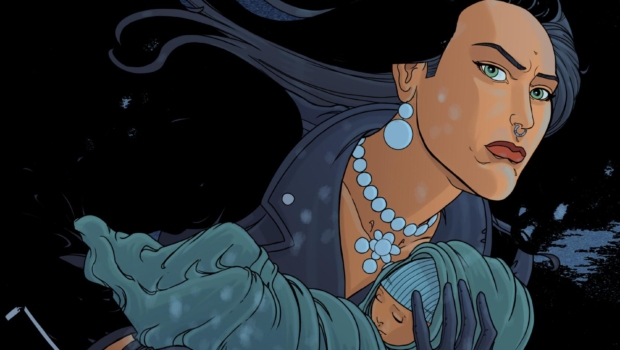 Hello, my fellow comic book enthusiasts! Yet another column titled Given to Me. This week I want to discuss the trailer for the upcoming comic book launch Karl Vincent: Vampire Hunter: Dracula Rising. It was originally going to be launched by the Evil Kat publishers, but, alas, that is no longer going to happen. So, what do I do? I have decided to launch these titles (including Adolescent Radioactive Samurai Platypi) myself. However, I have no clue how to do this (if anyone reading this article can give me any guidance whatsoever, it would be appreciated.) Therefore, the first step I have taken is to create a live action trailer for the sake of promotion.

This trailer was not made in Florida, a fellow DJ friend of mine has a production company out of Dallas called Reel Unicorn Productions and they agreed to create this for me dirt cheap! Mucho necessary since I’m paying my artists and have no budget for filming. The scene that we decided to do was the flashback scene where Dragana is being chased by her husband, that she didn’t know was the Prince of Darkness himself…Dracula! It seems that Dracula kept his true identity from his wife, calling himself Drake. His sole motivation for marrying Dragana was to create their offspring, which turned out to be a daughter named Dominica!

The reason Dracula wanted to mate with Dragana was purely selfish. You see, Vlad has discovered that four crystals, called the equality crystals, when activated properly during the Equality Equinox, will help strengthen vampires and enable them to take over the world as they will no longer share the weaknesses that prevented them from taking over mankind in the first place. But only the royal bloodline of Vlad Tepes, ruler of Wallachia and Dragana Vadoma, a gypsy princess, will activate the crystals during the ritual and bring about the changes needed for total world domination. Hence Dominica was created solely for the ritual during the Equality Equinox. When Dragana found out the truth about her husband and his desire to procreate with her, she took her daughter and fled. Trying desperately to prevent Dracula from kidnapping his daughter.

Here are some stills from the production.

Tags: Dracula, given to me, kevin given