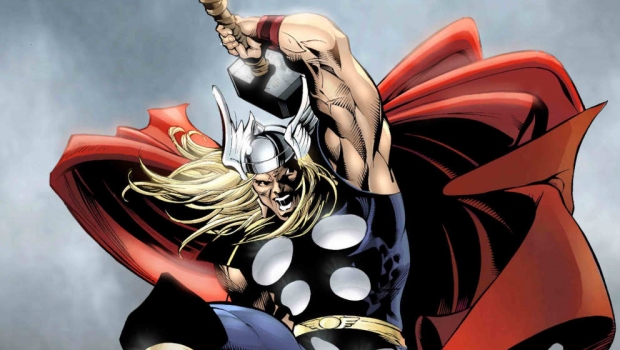 This week I want to discuss the character of “Thor” in the Karl Vincent universe. First, I know that Marvel’s Thor is the definitive Thor in the world of comic books, but other comic book companies have a “Thor” in their mythology as well. So, I am obviously not going to do the same thing that they did with the character, having said that, here is Thor in the KRG universe:

Thor was born in Ancient Greece in 3218 B.C. to the same clan of immortals as Athanasius (Nathan) Timon, his birth name was Herakleias and he was worshipped by the ancient Greeks as Herakles or in Roman: Hercules. After the disastrous marriage to Deianeira he travelled abroad, eventually settling in the Norwegian lands.

He was abandoned by his parents, who were Titans, so he does not know them. He was raised by Greek peasants whose names he does not remember because he was struck by lightning several times in life. The peasants who worshipped him reasoned that his father must be Zeus. He was first struck by lightning around his twentieth birthday.
When Hercules was trying to take his bride Deianeira home, he had to cross the Evenus River. Nessus, a centaur, served as ferryman. First he rowed Hercules across and then, as he started to row Deianeira across, he tried to rape her. Hercules, justly enraged, drew one of his poisoned arrows and shot the centaur. Before he died, the centaur persuaded Deianeira to take some of his blood to use as a love potion should Hercules ever cause her to worry.

In time, Deianeira became suspicious of Hercules’ interest in another woman, named Iole, so she smeared some of the carefully-saved centaur blood on a tunic and gave it to Hercules, trusting that it would act as a love potion and return him to her.
Unfortunately, the centaur had lied. The blood contained not a love potion, but a powerful toxin from the poison with which Hercules had tipped his arrows. It had come from the Lernaean hydra that the hero had killed in his second labor.
When Hercules put on the tunic, it burned his skin. He was in such excruciating pain that he wanted to die. Note that the burning would have killed an ordinary human, but Hercules was not such a one. Legend says that after consulting an oracle for advice, he had a funeral pyre built for himself. He then mounted it and eventually persuaded a friend to light it. He was then allowed to die and went to the gods where he was reconciled with his tormenter, the queen of the gods, Hera. She allowed him to marry her daughter Hebe and live among the gods thereafter. That’s the legend, but the reality is that Herakleias journeyed as far away from Greece as possible and wound up in the Norwegian area.

He was still burning from the poison when Sif, an Asgardian Immortal, brought him to the goddess Idun, who gave him a golden apple of immortality, which cured him of the burning sensation. The Asgardian immortals “adopted” Herakleias and reddened his hair.
He was from then on known of as Odin’s son, not Zeus, and was given the name “Thor.” After pagan worship ceased “Thor” wandered the globe and wound up in Egypt. Subsequent lightning strikes have left him as a “special needs” immortal and he often confuses the old days among the Olympian immortals and the Norse Immortals, calling himself the Greek god Thor. Thor was recruited by Karl Vincent on his mission to prevent the resurrection of Sekhmet and Kali and destroy Lilith, who was resurrected in “Karl Vincent: Vampire Hunter” #1.

Thor will be played by actor Guy Leinbach in Last Rites: The Return of Sebastian Vasilis. In production now from Crisp Film Works.

The earliest records of the Germanic peoples were recorded by the Romans, and in these works Thor is frequently referred to—via a process known as interpretatio romana (where characteristics perceived to be similar by Romans result in identification of a non-Roman god as a Roman deity)—as either the Roman god Jupiter (also known as Jove) or the Greco-Roman god Hercules.

The first clear example of this occurs in the Roman historian Tacitus‘s late first-century work Germania, where, writing about the religion of the Suebi (a confederation of Germanic peoples), he comments that “among the gods Mercury is the one they principally worship. They regard it as a religious duty to offer to him, on fixed days, human as well as other sacrificial victims. Hercules and Mars they appease by animal offerings of the permitted kind” and adds that a portion of the Suebi also venerate “Isis“.[5] In this instance, Tacitus refers to the god Odin as “Mercury“, Thor as “Hercules”, and the god Týr as “Mars“, and the identity of the Isis of the Suebi has been debated. In Thor’s case, the identification with the god Hercules is likely at least in part due to similarities between Thor’s hammer and Hercules’ club.[6] In his Annals, Tacitus again refers to the veneration of “Hercules” by the Germanic peoples; he records a wood beyond the river Weser (in what is now northwestern Germany) as dedicated to him.
In Germanic areas occupied by the Roman Empire, coins and votive objects dating from the 2nd and 3rd century AD have been found with Latin inscriptions referring to “Hercules”, and so in reality, with varying levels of likelihood, refer to Thor by way of interpretatio romana.

Images: _001 Thor as imagined in DC comics_002_Thor in the DC universe again._003 Thor in the Marvel Universe._004_Karl Vincent meets Thor from “Karl Vincent: Vampire Hunter” #5 (Scott Story art)_Deianeira as she appeared in Marvel comics_006 Hercules and his poison arrow._007 Actor Guy Leinbach will play the Greek god Thor in Last Rites: The Return of Sebastian Vasilis.

Tags: given to me, thor