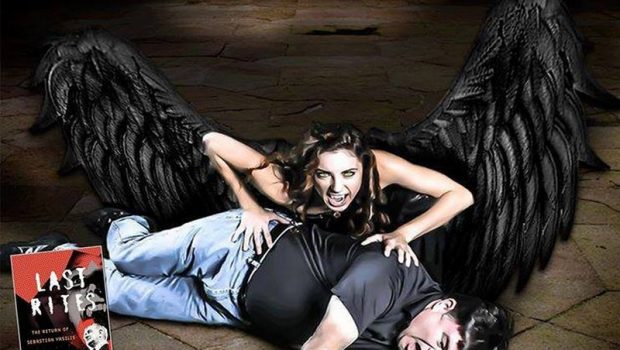 This past Saturday (3/4/17) we filmed the live action portion of the opening credits scene for Karl Vincent: Vampire Hunter, Last Rites: The Return of Sebastian Vasilis and I must say that production went extremely well. The more we film, the smoother it gets as this cast and crew continues to work together. The first part of the sequence will be animated and then we get into the live action portion of the scene.

In this scene Sebastian has turned into a bat and Karl is chasing him down in his van. The sun is rising and Sebastian must find cover so he flies into an old barn, Karl is in hot pursuit. Karl pulls into the old farm house and enters the barn. He finds Sebastian hiding from the sun behind some bales of hay. He gets out his vampire hunter kit and takes a stake and mallet then approaches Sebastian.

Will Karl finally succeed in killing his arch-nemesis or will Sebastian turn the tables and destroy his pursuer?
It was a great shoot and we got some great footage. I will let the pictures do the talking for the rest of this article. Next week I’m going to finally talk about who Sebastian Vasilis is. How is he related to Dracula and how did he become Karl’s arch-nemesis. Much thanks to Dave Tomkow for allowing us to film at his horse ranch in Florida.

The film is based on my novel: Last Rites; The Return of Sebastian Vasilis, which in turn has been turned into a 6 issue comic series all things Karl Vincent are available on amazon, kindle, Indyplanet and Drive Thru Comics.

Tags: given to me, kevin given