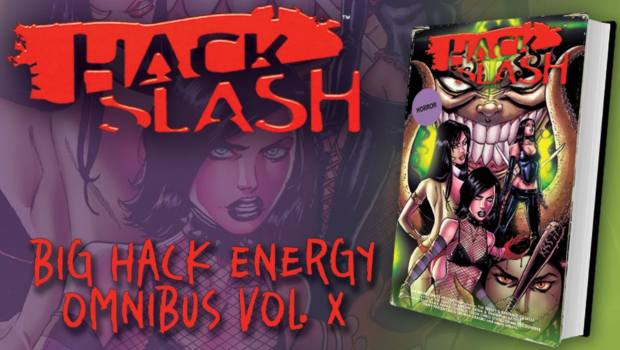 Tim Seeley’s Hack/Slash has been one of the biggest fan-favorite indie comics for over 15 years – actually nearly 20! Especially for horror fans, Seeley and his collaborators have delivered so many exciting stories and fan service. One of the hallmarks of the series is its frequent boundary pushing crossovers. What other comic series has an official collaboration with the Suicide Girls? At Dynamite, we’ve been proud to cross our own crazy wires with Seeley’s magnum opus on multiple occasions. Now in a special, big, sexy, oversized hardcover, all of those stories are combined for your shelf!

Now available on Kickstarter, the HACK/SLASH: BIG HACK ENERGY OMNIBUS VOL. X contains Hack/Slash vs. Eva: Monster’s Ball #1 – 4, Hack/Slash vs. Vampirella #1 – 5, Hack/Slash vs. Chaos #1 – 5. PLUS a brand new story starring Cassie and Vampirella that can only be found in this book. This omnibus is the perfect complement to the two omnibuses of the core Hack/Slash saga released so far too.