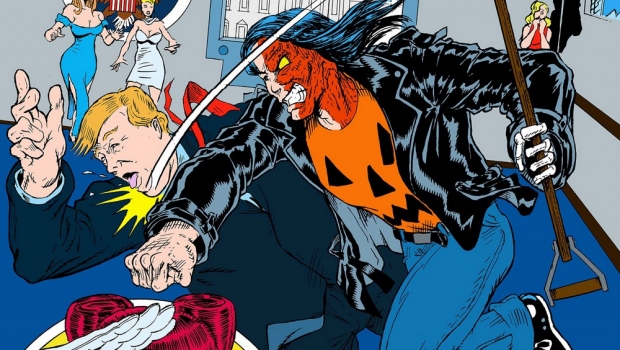 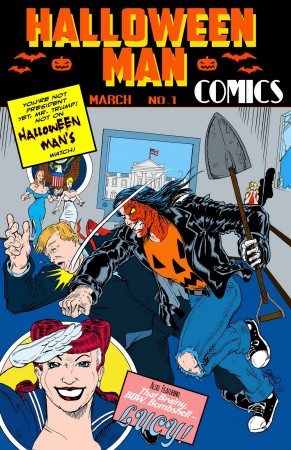 In March 1941, Joe Simon and Jack Kirby took a political stance against the rise of fascism in Europe with their famous creation, Captain America. Now in the 21st Century, a presidential candidate for the great United States of America, a man whom not long ago was seen as nothing more than a media farce, has risen through the ranks with his hate-filled rhetoric.

The creative team of the underground comic, Halloween Man is honoring Simon and Kirby by taking a stance we hope they’d approve of.

Donald Trump says he will “Make America Great Again.” Well, I for one believe America is already great and one of the things that makes it so is its people. A people who are diverse culturally, racially, sexually, and religiously. America’s melting pot culture is what gave us everything from Rock ‘n’ Roll to Chicken Fried Steak. I know I’m just the creator of an underground comic, but I love this country and seeing this hate sweep the nation is absolutely heartbreaking. So I’ll fight it with the only weapon at my disposal, my characters. If anyone feels similarly powerless, please remember, we’re not. Together, we can show Donald Trump and his followers, that America is better than his narrow view of it.

I invite you to share this, print it up, paste it anywhere you want. This image is free. It’s protest art. Please join Solomon and Lucy and help fight the monster of fascism on our homefront.