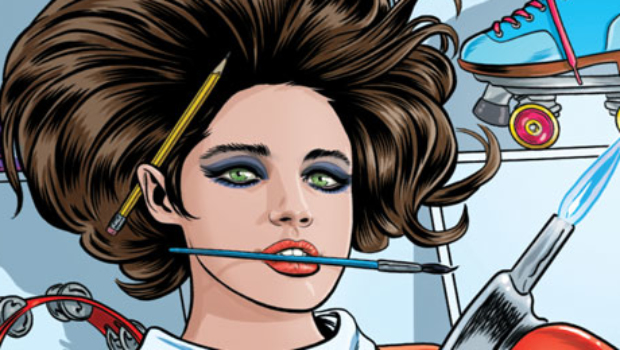 HEY AMATEUR: How to go from novice to nailing it in 9-panels

In case you haven’t heard, FEMME MAGNIFIQUE was recently nominated for a prestigious Eisner Award in the Best Anthology category. While it didn’t win, it’s such a tremendous honor to receive a nomination. This would not have been possible without the fans.

“Wanted to let you know that I’m in the throes of crowdfunding my second anthology, HEY, AMATEUR! and many of the contributors you know and love from FEMME MAGNIFIQUE are confirmed if we meet our funding goals. Gail Simone, Jill Thompson, and Magdalene Visaggio will be joined by some new talents including NY Times bestselling creatives Delilah S. Dawson, Erica Henderson and John Allison. Also, veterans Peter Bagge and Simon Bisley are on board among many others. I reveal 2 new subjects and creative teams daily in my Project Update and through social media. Here’s the cover by superstar Michael Allred. ” according to creator Shelley Bond

and she continues “The premise of HEY, AMATEUR! is “How to go from novice to nailing it in 9-panels.” We have such a diverse range of subject matter for these one-page stories from the practical (How to catch a loose dog, make a curry, be mindful) to the peculiar (How to letter a comic book page, defend yourself from vampires or train your doppelgänger). I’ve included a sample below so you know the kind of cool, exclusive hardcover we’re building. We’ll start with 50 stories/128 pages with hopes of making it to 100 stories in a 224-page volume, the same size as FEMME MAGNIFIQUE.
Here’s the link. If you’ve already backed the project, major thanks! If not, I hope you’ll join us or at the very least, spread the word. As you know, a retweet or thumbs up can make or break a campaign. Sorry for the unsolicited intrusion.”
kickstarter.com/projects/sxbond/hey-amateur