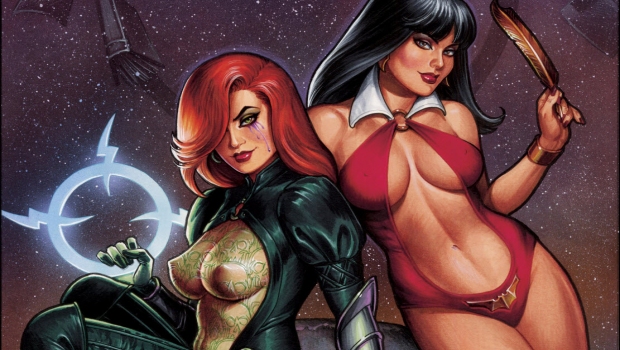 Dynamite is proud to announce that the acclaimed Joseph Michael Linsner will, for the first time ever, launch a crossover event sharing the spotlight between his beloved creator-owned heroine Dawn and the comic book horror icon Vampirella. Dedicated fans of the two femme fatales can enjoy the six-issue Dawn / Vampirella series when it debuts in early 2014, featuring a whimsical script and breathtaking covers by Linsner himself.

In Dawn / Vampirella, a ten-headed demon named Ravana tricks Dawn and Vampirella, snatching them away and holding them hostage. With the two most beautiful women in all worlds at his mercy, Ravana wishes to select one as a mate to usher in a new age. Rather than a challenge of physical prowess, the ladies choose a more sophisticated and feminine contest, facing each other instead in a competition of storytelling prowess. If Dawn wins, the new age will be one of light. If Vampirella wins, it will be an age of darkness. Together, they take Ravana to the bloody shores of Drakulon, to post-apocalyptic New York, and to worlds beyond his wildest dreams. Ultimately, the ladies know that they must join forces to overcome him… but what common ground can be found between Goddess and Vampire?

Joseph Michael Linsner is most well-known for Dawn, his personal Pin-Up Goddess. After her debut appearance on the cover of Cry for Dawn #1 in 1989, Dawn struck a chord with thousands of fans on an international level. She is currently published in six languages and has come to life in the form of statues, action figures, t-shirts, lithographs, lunch boxes, and trading cards. An award-winning illustrator, Linsner has painted covers for all of the major comics characters, including Wolverine, Justice League, Conan, and Vampirella. One of his proudest moments was getting to illustrate a short story written by Stan Lee for Actor Comics Presents.

Nick Barrucci, CEO and Publisher of Dynamite, says, “I’ve known Joe Linsner since Dawn first appeared in comics. For two-and-a-half decades, he’s been a truly innovative, independent voice in this industry, crafting tales that plumb the depths of human emotion and spirituality. I respect his life’s work so much, and have hoped to work with him on a crossover since before the goddess celebrated her twentieth anniversary. At the time, Joe said he would think on it, but it seemed the longest of long shots, as he’s never allowed anyone else to be involved with Dawn on any creative level. Dawn is his legacy… and yet, five years later, he felt that he could craft a story so great that his fans would warmly welcome the best — and only — Dawn crossover in history. It’s truly an honor to be working with Joe on this creative level. It’s one of the most exciting crossovers of 2014.”

The Dawn / Vampirella miniseries will be solicited in Diamond Comic Distributors’ Previews catalog, the premiere source of merchandise for the comic book specialty market, and slated for release in early 2014. Comic book fans are encouraged to reserve copies of individual Dawn / Vampirella issues with their local comic book shop or hobby specialty store. Each issue will also be available for individual customer purchase through digital platforms courtesy of Comixology, iVerse, and Dark Horse Digital.