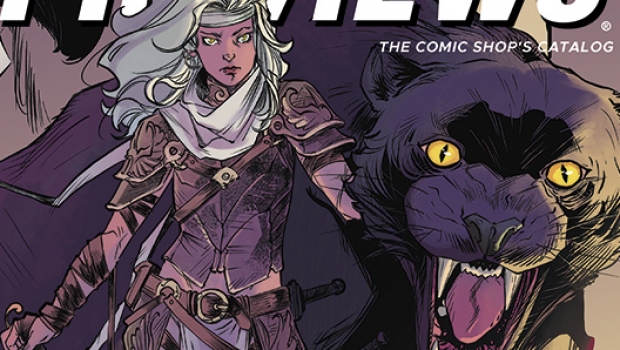 ON OUR BACK COVER: Continuing the story of DC Universe Rebirth #1, Batman and the Flash investigate “The Button” in a four-part crossover story that begins in Batman #21.

Kids Comics Month — To help the next generation of comic book readers find reading material, PREVIEWS spotlights some of the best kid-friendly, all-ages comics and graphic novels out there.

On The Flip Side — Tying in with Kids Comics Month, PREVIEWS talks to Gene Yuen Lang about the Reading Without Walls Challenge, which encourages readers to explore characters, creators, and formats that are new and unfamiliar to them, as well as his own work in comic books and graphic novels.

catBUZZ — PREVIEWS shines a special spotlight at some of the blockbuster books and products coming in this April. Kitty Pryde returns to take command of an X-Men team in Marc Guggenheim and Ardian Syaf’s X-Men Gold from Marvel Comics. Plus, IDW Publishing reveals the backstory of 24: Legacy’s protagonist, Eric Carter, in the prequel comic, 24: Legacy – Rules of Engagement; an exile from a world where dreams are truly magic discovers our world in Jason Latour, Ivan Brandon, Greg Hinkle, and Matt Wilson’s Black Cloud from Image Comics; Naruto’s son has a legacy and a legend to live up to in VIZ Media’s Boruto: Naruto Next Generations; Bill Willingham brings together the heroes of Edgar Rice Burroughs’ work for one epic tale in Dynamite Entertainment’s The Greatest Adventure; Diamond Select Toys sculpts Jean Grey rising from the fires for the Marvel Gallery: Jean Grey PVC Figure; Funko introduces a new line of collectibles with the Super Deluxe Vinyl series; and many more products you have to look forward to in the spring.

PREVIEWS Exclusive Apparel — Each month PREVIEWS offers comic book fans and pop culture aficionados a selection of t-shirts and other apparel that can only be found in your local comic shop! Show your loyalty to Hydra with the Hydra Symbol Heath Action Snapback Cap. Plus, J. Scott Campbell draws Marvel Comics’ newest heroine for the Spider-Gwen: “Wall Cling” White T-Shirt, the Doctor reveals the wonders of the universe on the Doctor Who: “Twelfth Doctor Galaxy Coat Lining” White T-Shirt, and the Sorcerer Supreme summons mystical forces on the Doctor Strange: “Holographic Reality” Black T-Shirt. These and many other shirts can only be found through PREVIEWS and your local comic shop

Indie Edge — PREVIEWS talks to Bill Willingham, the writer of Fables, about his new mini-series for Dynamite Entertainment, The Greatest Adventure, as well as past works and the books he enjoys reading today.

All this awaits you in the February edition of PREVIEWS, which goes on sale at your local comic shop or specialty store on Wednesday, February 1st with the regular cover price of just $3.99.