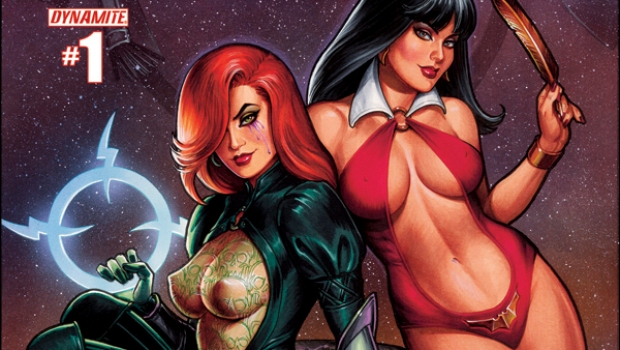 As per the original PR heralding this exciting new era: “our story begins when the silver tongued demon Masodik tricks and kidnaps both Dawn and Vampirella. He tells these two “Bad Girls” they are the most beautiful women in all of the worlds. Their demon host demands a “cat fight” to see who is best suited to his purposes, but the ladies suggest something more feminine — a storytelling contest. Together they take us to the bloody shores of Draculon, to post-apocalyptic New York and to worlds beyond imagination. Only Ravana knows what rewards and punishment await the winner and the loser in this duel of horror hostesses.”

C4S ‘visits’ Joseph Michael Linsner and has a brief talk about his plans with his own creation and his very first crossover ever.

C4S: Hey Joe, great to hear from you! In finding out these plans, this crossover, this fan-fest, I was so excited for your art alone even! How do you feel yourself about this project?

JML: Hey Richard! I am very excited about it. It has been a lot of fun so far — how could I not have fun drawing 2 of the sexiest ladies in comics?

C4S: Do let me know how this crossover even came into place. Why pick Vampirella to join up with Dawn?

JML: Vampirella is the Queen — she is comic book royalty. She is the original. There was no one like her before she appeared, and she’s inspired everyone who has followed her, including Dawn. I thought that if I was ever going to do a crossover, let me start at the top.

C4S: A little concern: will this crossover be in-continuity with the Vampirella and/or Dawn chronology?

JML: I’d say it goes along with the continuity. It is not an imaginary tale, such as an ‘Elseworlds’ or a “What If..”, but it also doesn’t depend upon any current story lines. I think a first time reader, someone new to both Dawn and Vampirella could pick it up and enjoy it.

C4S: I believe you are taking a new approach to the whole crossover-theme, right? No more ‘battle battle, become friends after discovering a united foe, more battle battle’…

JML: I wanted to try something new, and build upon something inherent to both characters. They both started out as horror hostesses, so it felt right to bring that element into this series.

C4S: When you think of Vampirella: what are your own thoughts on her?

JML: Sexy. Strong. Eternal. She is both cool and hot at the same time. In my mind’s eye, the Vampirella I see is drawn by the great Jose Gonzalez. My Vampi is not an imitation if that, but his version is my mental starting point.

C4S: You have been drawing Vampirella images for some time now, and during the Harris-era I believe we fans first got to drool over your artwork of this Drakulonian vixen. How does it feel to get back to her, artwise?

JML: I’ve always wanted to draw her in a story, but I never got the chance. This is fulfilling a childhood dream of mine. I feel lucky for the opportunity.

C4S: So why DID you choose Vampirella as the first ever character to have a crossover with?

JML: Like I said, she’s the Queen. In a way, she chose me. Plus, I am pleased with the tale I came up with the storytelling contest. Without the right story, I wouldn’t be doing this. But I know I’ve got the right one — I can feel it.

C4S: Are there any more crossovers planned? Or which crossover would you like to pursue next?

JML: Batman! A Batman/Dawn crossover would be a dream. He is my favorite superhero, but I am not going to hold my breath for that to happen.

C4S: What are your plans on Dawn, now?

JML: I start drawing the 4th Dawn mini-series ‘Always Darkest’ right after I finish Dawn & Vampirella. I’ve been writing that over the past few years, and everything is in place. I printed a teaser in the last Dawn one shot, ‘Swordmaster’s Daughter’. The new 2014 Dawn Sketchbook has a three page excerpt of visual notes, and premieres later this month at San Diego Comic Con International — booth #4900.

C4S: Sinful Suzi was a blast, really. Are you also trying to get her back into your schedule as well? And please share info on any and all new projects I am unaware off and so might my readers be!!

JML: I had a great time getting Sinful Suzi into print with her first story in the one shot ‘Sin Boldly’. I am definitely going to do more with her. Maybe another one shot leading up to her full mini-series. We’ll see — stay tuned!

And so we leave the amazing Linsner and can rest assured he will woo us fans again in the near future, with never-enough projects by his hand, imagination and sheer magic!