Interview: The Happy Few – Creator Frederik Hautain about being a delirious genius

The Happy Few is a story about a delirious genius experimenting with narcotics turns ordinary people into super-humans and will turn Miami into a cauldron of violence.

After spending almost 15 years as the Editor in Chief of comic book news site Broken Frontier, Frederik decided to leave his journalistic position to do what he loved the most: writing comics and creating stories. Frederik debuted in 2016 in the Broken Frontier Anthology (review here and here) with his story getting great reviews from the comics press as well as the participating creators in the book.

ComicsForSinners read the synopsis (reprinted below in nice colors) and decided it was a great moment for some quality time with this Giant from Belgium!

About The Happy Few

A delirious genius experimenting with narcotics turns ordinary people into super-humans and will turn Miami into a cauldron of violence.

In The Happy Few, a cool local surfer dude named Len Jeffries gets brutally beaten inside a Miami nightclub for hitting on the new prize girl of Mario ‘Fat Cube’ Hernandez, a local gang lord with too much platinum around his neck. As if by fate, he runs into Doctor Zeller, an evil genius who offers him a chance for retribution. All he has to do is take one little pill, and he’ll be wielding way more power than he needs to get back at those stupid bastards… if all goes well, that is.

Q: so Frederik, you had an itch and started to write and that itch is about a “delirious genius”…. what does that say about you?

A: It says that I know how to write characters with whom I don’t have even the slightest bit of affinity. Except maybe for our shared desire to play god. Wait, that makes me delirious too, right?

No, seriously, that delirious genius bit is about how far one would go to get what he wants. And even though I have a competitive streak about me, I would never go to the lengths Zeller, our delirious Doctor, goes.

Q: so how did you come up with this concept?

A: The Happy Few was born out of an outline for a short story that I had written and which I felt had more legs than what I had originally planned.

Being in the Netherlands (Yes, ComicsForSinners EIC is from Holland: Red.), you probably remember the March 22 terror attacks in my native Belgium… seeing what happened there and looking at my story idea, I fleshed it out into a full 48-pager about power, powerlessness and how your life can be turned upside down by forces way bigger than you.

Q: So you have a concept, and how long did it take you to turn this into a script you want to take to the next level?

A: Well, I still have a day job and two young kids to raise, so I can’t always devote as much time to writing as I would want – though I very much plan on changing that in 2017 and onwards. And at the time, I was still Creative Director of Broken Frontier too.

But to answer your question, I wrote The Happy Few over the course of Spring in 2016. I guess it took me about three, three and a half months from idea to outline and defining the various characters to finished script.

Q: Can you tell me more about the characters in your book and to be really frank… are they somehow inspired by anyone or anything? Yourself perhaps? 🙂

A: Nope, none of the characters are inspired by myself or any of my life experiences. I’m not a big party person – I mean, I like to hit a bar, go to a concert and stuff, but I can count on one hand the number of times I’ve been on the inside of a night club.

That brings me to Len Jeffries, our protagonist, who’s a Miami local spending a good number of his eves in the clubs on South Beach. One night, he becomes mesmerized by Naomi Anaya, a Latino bombshell who turns out to the be newest prize girl of local gang boss Mario ‘Fat Cube’ Hernandez. Mario’s called Fat Cube not because of his big belly or Cuban background, but because of the amount of bling around his neck. Smart mouthed and proud as he is, Len doesn’t back down and gets beaten by Mario’s posse. Battered and bloodied on the South Beach curbs, Len runs into the aforementioned Doctor Zeller, who offers him a drug that offers him superpowers and a chance at redemption.

Q: How did you come across this amazingly talented penciler? From the previews I have seen he sure brings the right stuff to the mix!

A: Oh, Germán Erramouspe most certainly does! He’s great, a lot of fun to work with and has lots of integrity – we really click. Germán’s done lots of comics in Argentina, but in the US he’s been a bit under the radar, working for Avatar on stuff like God Is Dead and Crossed and most recently on the second volume of Grimm for Dynamite Entertainment.

I came into contact with Germán through Facundo Percio, who I worked with on the Broken Frontier Anthology. I was looking for someone who could easily switch between more grim moods and more humorous tones, and Germán was that guy.

Q: This is actually the second time you will be publishing a comic book story, is it not?

A: Yes indeed. As I mentioned, I also did a short story in the Broken Frontier Anthology, which I co-edited with Tyler Chin-Tanner at A Wave Blue World. I had so much fun doing that, that I wanted to do more… and here I am hammering out my writing career, one step at a time!

Q: How did you like that first time and the great reviews your story have received even?

A: I still can’t believe the comment of David Hine (writer of The Darkness, Second Sight, Stormdogs etc) that my story held its own amid the contributions of big name writers like Greg Pak, Cullen Bunn, Fred Van Lente and others. That was great to hear, as well as receiving some good reviews in the comics press.

Q: Can you tease about the Kickstarter yet? About the funding levels perhaps?

A: I don’t have to tease! You can check out the Kickstarter right here and go see for yourself.

I do want to point out that the book is going to be square-bound and have a beautiful cardstock cover and that you can also score lots of original art rewards if that’s your thing.

Q: Is there a Frederik-fansite we can check out to make sure we do not miss out on anything brilliant?

A: Not really. I have a placeholder up at www.frederikhautain.com but I still need to get to it. But people interested in getting in touch can contact me via Facebook or via Twitter @frederikhautain, whether it be showing their portfolio for a potential collaboration in the future or to ask about The Happy Few or the Kickstarter.

That means a wrap, readers of ComicsForSinners!

Delight your eyes on some exclusive preview material and make sure to tell us YOUR thoughts! 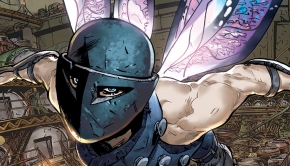