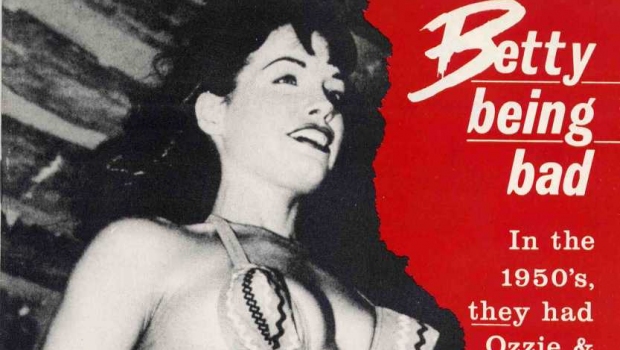 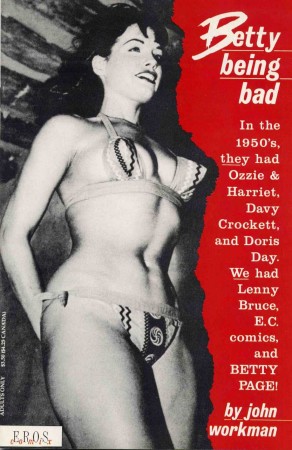 Welcome to the debut of a feature called “It Came From the Bad-Girl Archives,” in which I’ll occasionally shine a spotlight on some out-of-print and possibly long-forgotten comics that starred the sort of scandalous (and sometimes Not Safe For Work) female leads who have always reaped a goldmine in profits for comic-book publishers. Think the 1990s’ “bad-girl era” was the only time these femmes fatale became popular? That’s just the tip of the iceberg!

We’ll start with an out-of-print one-shot focusing on one of the queens of bad-girlness, Bettie (aka Betty) Page.

When it came to comic-book publishing in the 1980s and ’90s, no single female was a hotter subject matter than this real-life pinup queen of the ’50s, for whom interest in her long-forgotten career had been reignited in 1982 by writer/artist Dave Stevens when he created a fictionalized version of her as the girlfriend of Cliff Secord, the daredevil stunt pilot who moonlighted as the pulp-action hero The Rocketeer. With the rediscovery of Ms. Page’s work as a nude and fetish model (and occasional striptease artist) came a flood of comic-book titles and knickknacks, as indie creators and publishers alike tried to cash in on the “Betty Page” craze—with none of them aware (including Stevens) that Bettie was still very much alive. And that she might be looking for a bit of remuneration from all these people using her likeness…

Workman doesn’t touch on the particulars of Bettie’s life—her successful career as a pinup and fetish model, then her complete disappearance from the public eye after she quit modeling—but rather focuses on his memories of what her images meant to him, first as a teen just discovering skin magazines, then later as an established artist. In retrospect, they read like repurposed blog posts—fairly short, giving just enough insight into Workman to show why he liked Bettie—but in all honesty, you’re not really there for the memories as much as you are for the nude pictures. And there are quite a few of them.

Bottom line? For fans of classic pinup photography, it’s a good addition to your collection. For fans of John Workman, it’s an interesting insight to his younger days. And for fans of Ms. Page…well, how do you not own a copy of this already? Track one down on eBay or Amazon, if you can.

End note: As fans of Ms. Page eventually learned from Bettie herself, it was a combination of stricter moral codes—following a U.S. senate investigation of pornography, with Irving Klaw one of the main targets—and born-again Christianity that ended her modeling career. Bettie Mae Page faded into obscurity…until the 1990s when, one night while watching the television show Entertainment Tonight, she saw a segment about the resurgence in “Betty” Page’s popularity and the growing number of unlicensed products using her image—which was news to her! And she quickly took steps to rectify the situation and get what was long due her. (Apparently Disney studios’ lawyers had been right when they insisted that “Betty” be changed to “Jenny” for the 1991 film adaptation of The Rocketeer, just in case Bettie was still alive.) She even became friends with Dave Stevens. Bettie passed away in 2008 (as did Stevens), but at least she got to see the influence she’d had on art and pop culture before her time was up—an influence that continues to this day.