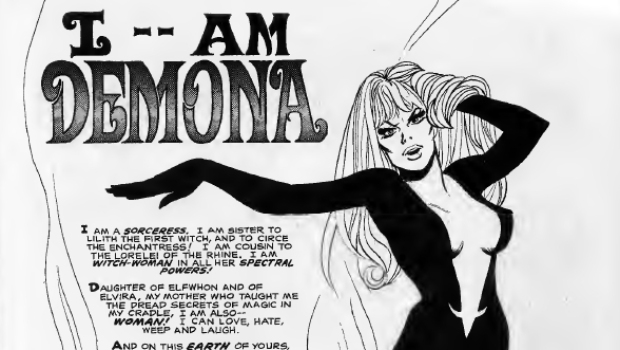 It Came From the Bad-Girl Archives: Demona the witch

Welcome to the latest installment of an occasional feature called “It Came From the Bad-Girl Archives,” in which I shine a spotlight on some out-of-print and possibly long-forgotten comics that starred the sort of scandalous (and sometimes Not Safe For Work) female leads who have always reaped a goldmine in profits for comic-book publishers. Think the 1990s’ “bad-girl era” was the only time these femmes fatale became popular? That’s just the tip of the iceberg! 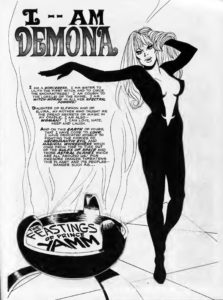 Today we’re looking at Demona, in the pages of Skywald Publications’ horror-comic magazine Psycho #7, cover-dated July 1972. Created by legendary writer Gardner Fox (DC’s Justice League of America, Green Lantern, The Flash) and illustrated by Steve Englehart (better known as the writer of Marvel’s Avengers, Defenders, and Captain America), this supernatural heroine was meant to be Skywald’s answer to a certain vampiress from the stars. As Englehart describes it on his website:

“My third and last magazine art job came in this CREEPY/EERIE knockoff from Skywald, on a Vampi knockoff named Demona. . . . However, dissatisfied with my inking on the heroine, I got girl-inker supreme Vince Colletta to do her figures.”

(This was the second collaboration for the Fox/Englehart team; their first had been on “Retribution,” for Warren Publishing’s Eerie #35. Englehart, it should be noted, started out in comics not as a writer but as an assistant for comic-art legend Neal Adams—they even worked together on the Denny O’Neil–scripted “The Soft, Sweet Lips of Hell” in Vampirella #10.) 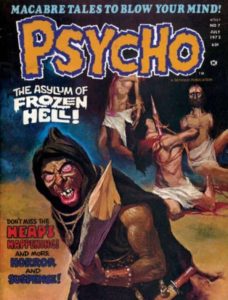 Skywald wasn’t alone in trying to jump on the Vampirella bandwagon—for example, Atlas Comics had Devilina (a demoness), Charlton Comics had Countess Von Bludd (a vampire), and Marvel Comics had the most famous Vampi competitor of them all: Satana, the Devil’s Daughter (a succubus), who’s still around—as evidenced in the 2017 limited series Spirits of Vengeance—but not nearly as popular as she was in the seventies. Demona, however, never made it past her first appearance.

The daughter of Canadian business tycoon Henry Mather and Elvira, an alien from Elfwhon—a planet of witches—who fled to Earth to escape the wrath of the black-art magicians in power, Desdemona Mather was a curvy blonde sorceress in a black, cleavage-revealing body stocking who fought supernatural threats as Demona. And just as Demona was a counterpart to Vampirella, her sidekick/love interest, occult authority Professor Jim Croft, was a stand-in for Vampi’s significant other, vampire hunter Adam Van Helsing.

Demona’s first—and only—adventure was “The Feastings of Prince Yamm,” a ten-pager in which she’s unable to prevent a young woman from being sacrificed to the Phoenician god Prince Yamm, to whom “even Baal paid tribute,” according to Croft’s copy of the Deilomikron—the equivalent of the Crimson Chronicles spellbook in Vampirella (and the inspiration for both: the Necronomicon of H.P. Lovecraft’s Cthulhu Mythos). Determined to stop Yamm from devouring any more innocent souls, Demona and Croft battle the god and his high priest to the death. Take a wild guess as to who the victors are…

Storywise, Fox provides a rather basic superhero script that mixes elements from Vampirella (a sexy heroine, an alien refugee from a planet of supernatural beings, a cult of evil-god worshippers) with Doctor Strange (Demona casts spells in rhyme and, as Strange is a “master of the mystic arts,” she’s a “mistress of magic, Venus of the black arts and white”). The latter isn’t too surprising, given Fox had just started writing Strange’s Lovecraftian-tinged adventures over in Marvel Premiere at the time.

Funny enough, Englehart took over the writing duties for Strange immediately following Fox’s run of issues. But for Demona he demonstrates an equally deft hand with a pencil—he certainly learned a lot while working for Neal Adams—although it’s difficult to tell what his version of the star is really like, since he asked Vince Colletta to give her a nice good-girl-art finish. Still, the final result has a great look to it.

Bottom line? For a Vampirella wannabe, Demona is an interesting footnote in the history of bad-girl comics, but with a stronger script could have been more than just a knockoff. If you’d like to check out “Prince Yamm” if only for the Englehart/Colletta artwork, it—along with the majority of Skywald’s publications—can be found at the Internet Archive, where you can download it for free.

“Demona: The Feastings of Prince Yamm”

Want to see the other entries in the Bad-Girl Archives series? Then give these reviews a read:

Betty Being Bad: art and story by John Workman