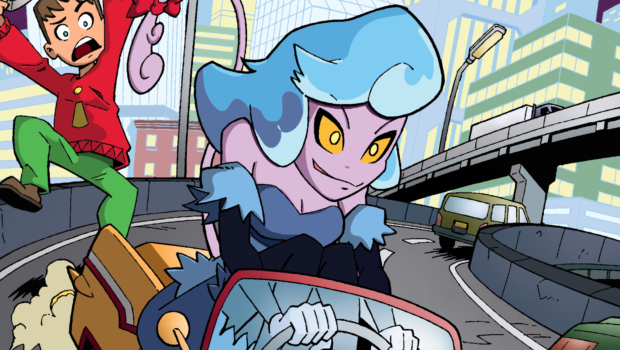 It is going to be an ALIEN SUMMER!

The first full issue of Alien Summer will feature 28 full colored pages of a wonderfully wacky comedic story. Due to Earth finding out about the existence of aliens a treaty is formed that allows for the export and import of goods. Earth’s biggest exports happen to be their pop-culture and entertainment. Aliens just love Earth’s imagination. They love it so much that they decide to come live on Earth to experience Earth life. The comic follows the adventures of one alien, Lunatia, as she comes to Earth as part of an exchange program to spend the summer with a host family. The main problem that arises is that all her knowledge of Earth comes from movies, comics, games, and manga. Thus, her knowledge is a bit skewed.

Alien Summer #1 was written and colored by Jeremy Kahn. The interior art was penciled and inked by Lime Robertson. The lettering was done by Natalie Jane. The main cover art was drawn out by Tracy Yardley. The variant cover was illustrated by Rura Kano. The issue was edited by Ian Flynn.

Jeremy Kahn is an alumni of Savannah College of Art and Design and freelance comic colorist. He has worked for a number of clients over the years with his most recent client being American Mythology for whom he has colored Casper the Friendly Ghost, The Pink Panther, and The Three Stooges comic books. He has also contributed coloring work to the upcoming Action Lab publication titled L.U.C.H.A.: A Wrestling Sci-Fi Thriller which ended a successful Kickstarter back in November.