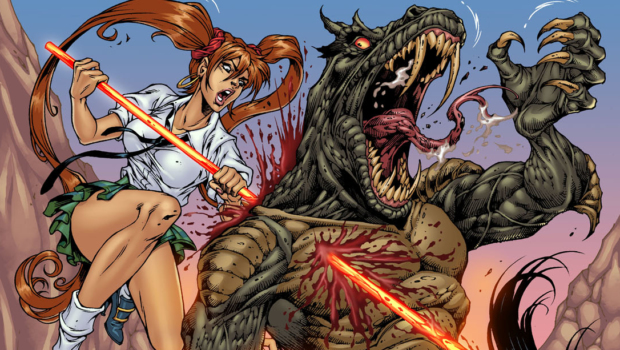 When Filipina schoolgirl Jinky Coronado attended the first Creating Comics Seminar of her young life, she never dreamed that it would lead to an actual career drawing and writing comic books.  But that Glass House Graphics seminar, held in early 2000 in Manila, Philippines, became a major changing point in her life.

That life had many interesting twists and turns.  Jinky Coronado entered and won a dozen beauty pageants; she was selected as Miss Pond’s Asia and became a magazine cover girl for the product brand; she became a lingerie model multiple times in FHM magazine; and she had two calendars devoted to her.  Upon graduation she moved to the USA, got married, had a family and became a professional makeup artist working on visiting Filipina celebrities for The Filipino Channel network.  But becoming a comicbook artist with a speciality drawing adorable, sexy girls was perhaps her biggest surprise.

It’s Jinky’s own Banzai Girl series, however, that’s brought her the most attention on and off for the past 16 years.

“While surrounded by guys like Bong Dazo and Stephen Segovia creating big, powerful super-hero images in those first comics seminars I attended, instructor David Campiti urged me to write and draw what I knew best,” explains Jinky from her Orlando home.  “That got me on the path to write and draw a comic about my life in school with my friends and family.  But when a fellow seminar attendee suggested the name Banzai Girl, that sounded exciting — so I made the comic about me and my friends tangling with all the Filipino monsters of myth that I grew up hearing about.  The Duwende, the Kapre`, the Manananggal, even the Snakeman hidden beneath Robinson’s mall!”

Jinky’s story-and-art journey into fantasy was quickly picked up by Sirius Comics, which published four issues, an Annual, a Preview Book, a Sketchbook, and a collected edition, with Wilson Tortosa and colorist Michael Kelleher collaborating with her on art and color.

In a business where variant covers prove popular, Jinky did everyone one better — becoming her own cover model, in costume, portraying her character.  She even became her own “booth babe,” cosplaying her character at a number of conventions.

“Then I was married, had our baby Jasmine, and put Banzai Girl on hold for a few years,” she said.  She returned to do a second mini-series through Arcana, which released four new issues, a Special, and a manga-format Banzai Girl volume that collected everything from the Sirius run.

Then, with webcomics on the rise, Keenspot.com urged her to bring Banzai Girl out of retirement.  Pleased by online fan response, Jinky created new art for an oversized sexy color pin-up book, Banzai Girl: Stripped Down! through SQ Publishing — and Kickstarted a definitive edition of the first Banzai Girl arc in softcover and hardcover.  All the while, she was working on one more, extra-long, tale picking up seven years after her last story for Arcana, to give her adventure series a sense of closure.

“I never expected to take 10 years to write, draw, letter, and color it!” she says.  “I included Jasmine in it as a character; started on it when she was three and expected to publish it by the time she was seven, so I made her seven in the story.  Now she’ll be 14 by the time it comes out!”  She shakes her head as she smiles at the memory, hardly believing how fast time flies.

Banzai Girl Volume 2: Fifty Shades of Prey is a 160+ page full-color graphic novel that Jinky has just launched on Kickstarter.  She packs the presentation with 30 Reward Levels, focusing on custom commissions and original art.  That was important to her.

“So many comics artists are drawing digitally now, on a Wacom Cintiq or a tablet,” Jinky explains.  “Many fans and comics art collectors haven’t yet realized this means no physical original art exists for those books.  There will soon reach a point where no actual pages exist to study every brushstroke, consider every erase mark and touch-up, or interpret every remaining pencil line.  There will also be no physical page to collect, no Artist Edition for future generations to appreciate.  It is quite literally becoming a lost art.”

Jinky Coronado draws every page old-school — drawing in pencil on art board.  “I don’t draw on a tablet.  I do tight layouts on tracing paper, and Larry Tuazon and I work on the finishes in tight pencils on art board.  We don’t ink, but we render the pencils in a technique that looks inked.  You can study every thought process, and not a single line is buried, lost, or erased under someone else’s inks, either.”

Her brother Pejee does cleanup of her pages in Photoshop, and Katrina MaeHao handles the coloring.  “I love the result,” she says.  “I focus on strong character storytelling, good action, and a lot of sexiness.”

How does a female artist feel, making her artwork so appealingly sexy?  “Just like Olivia DeBerardinis has done all her life,” says Jinky.  “I’m also a big fan of Al Rio, J. Scott Campbell, Tina Francisco, and Dean Yeagle — so you can see the influences pretty clearly.  I love it.”

Her motto for drawing Banzai Girl?  “If you can’t see the thong, you’re drawing it wrong!” she says, laughing. 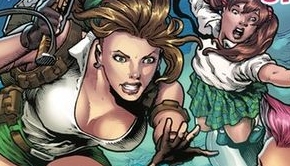 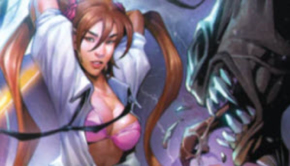