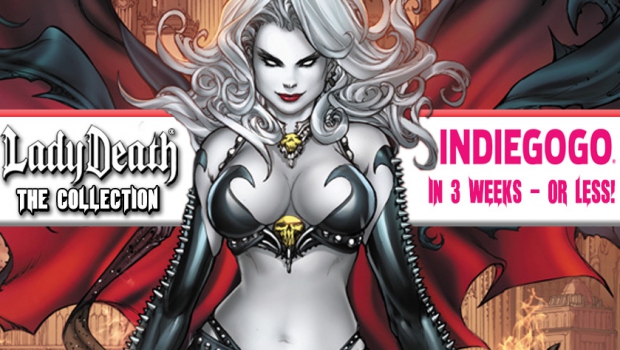 Lady Death: The Collection to Launch on Indiegogo

Lady Death: The Collection, is the definitive assortment of ten premiere “Chapters” of Lady Death’s newest stories, trade paperbacks and a trio of hardcover art books featuring an incredible group of international talent.  “This is a way for Indiegogo comics culture to become familiar with Lady Death and our company”, says Pulido. “We’ve been crowdfunding since 2015, and have delivered all projects within eight weeks of the campaign close.”

Each Lady Death: “Premiere” Edition is a 48-page, square-bound format graphic novel. The campaign’s goal is print updated versions of all the Lady Death premiere editions, since most are all sold out. “We take every element of our campaign quite seriously,” says Brian Pulido. “Including customer service and shipping. We have our own dedicated fulfillment center and we obsess over every detail every day.”

Make sure to join Coffin Comics for the Lady Death: The Collection on Indiegogo Thursday November 7th at 3:00PM PDT / 6:00PM EDT and sign up for the mailing list at www.LadyDeathUniverse.com to stay up to date.