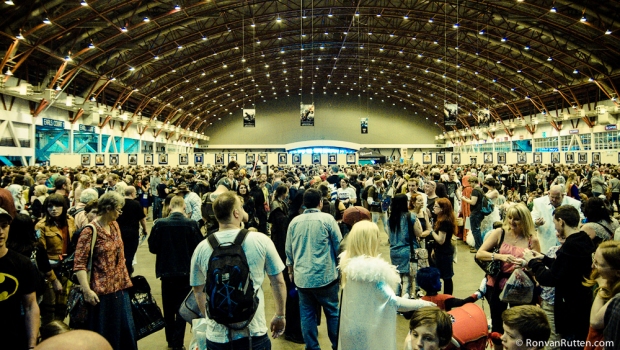 LFCC 2014: The Death Of Superman & Not Seeing Stan Lee

I got into comics somewhat late in my life, well, maybe not THAT late, but I was 15 at the time. Flashback to summer of 93 and I was out cycling in Zandvoort with the scout group I got accepted into. As we were having a much needed water break. I wandered into a bookshop to check out the newspaper headlines (I’m a bit of a news junkie) and I noticed some comics. One piqued my interest because of the cover alone.

Superman 99, The Death of Superman.

I’d read several Spider-Man comics when I was younger, but found that the storylines were so interwoven that it was a bit hard to follow so I didn’t renew my subscription. I read some comics after that but not that many, and mostly Dutch ones. Anyway, back to ’93. I knew Superman was pretty much invulnerable but Superman dead? That I needed to see to believe. Several days later, when I got back home, I cycled to a secondhand store to try to find back-issues. For some reason someone had dropped off several Superman comics and it included most of the comics leading up to 99.

I had asked the owner of the second hand shop to set aside any comics that came in. My idea was to sort them there and just get the Superman ones. The last batch of comics he got where the original American ones, the ones I had read before where all translated. This gave me the chance to finally read the originals! I bought a big stack, without sorting through them. I thought, it’s the original so it can’t be all that bad. Some were, most weren’t. Happy me. This one moment got me into reading some old X-Men, Spider-man, Justice League and more Superman.

1995 was mostly spent hanging out with the only kid in school who also read comics and we travelled to our new hangout in Rotterdam to buy comics, grab a burger and then head back home to read. At the time, most of Age of Apocalypse crossover.

In 1996 I decided to leave Holland and do an exchange year in the US, hoping I would be placed in a big city where I could travel to the comic bookshop with ease, I ended up in Gonzales, LA where the one comic book store was miles from home and host parents that thought comics where a bit of a waste of money/time. On the few trips I did make I spent some time mostly getting some new comics and drooling over the framed X-Men #1 he had on display. I did manage to find most of the Heroes Reborn series. Still hate Liefeld’s run on Captain America, too many abs and teeth…

And now to get back to the point of my article, YES IT HAS A POINT, bear with me. 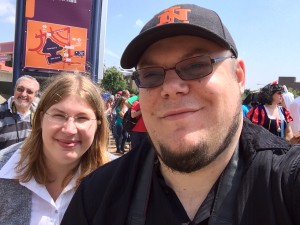 In these comics I saw ads for all kinds of conventions in the US. Never thinking we had these in Europe (we did). Years later I saw an ad for FACTS in Gent, Belgium and thought it would be a fun day out. So on the Sunday I hopped in my car and drove south and spent a day in heaven. Hung out with artists, scored a few sketches, met Richard (One of the artist alley head honcho’s) which led to me being a volunteer at FACTS 2 years later.

Now, London Film & Comic Con 2014. I was pointed to this by friends and after checking the website I had a small heart attack because the Godfather of Marvel Comics would be there, Stan Lee. I talked about it with my better half (aka the girlfriend, known as Loes from here on out) and we decided that this would be an excellent chance to at least see him at a distance and wave. (Spoiler, we didn’t see him and even if we waved, he was stuffed in a separate room so he wouldn’t have seen us anyway) 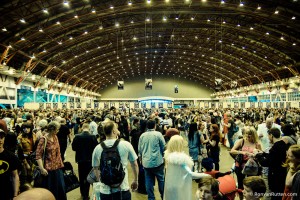 After that, ROAD TRIP TIME! We received the tickets via mail and when the time came, we hopped in the car and started our drive to Calais. After arrival in the UK we had an early night to grab an early train on Saturday to London. Lucky for us we have friends of the family living near London so we got to park the car there saving us a trip into London. 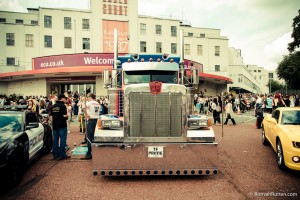 We arrived at Earl’s Court and walked right into a line as long as the hall itself. 2,5 hrs. later we arrived at the ticket office and changed our tickets.

The pros of LFCC

– Its huge. They had 2 halls set up. EC1 was for all the comic artists (including Stan Lee) and EC2 was the main hall with all the actors, shops etc.
– Great selection of actors and artists
– Loads to see
– Many stalls
– Got autographed photo of Paul McGann & Bernard Cribbins
– Had a nice chat with a few great artists.
– Had a great (and cheap) lunch a few minutes’ walk from convention and ended up sitting next to Jenna Coleman.
– LOADS of fun Doctor Who stuff to buy. I ended up buying a signed limited print of Superman & Steel smashing Daleks by Jon Bogdanove and Loes finally has her Tardis bag. (Disappointment: it’s not bigger on the inside) 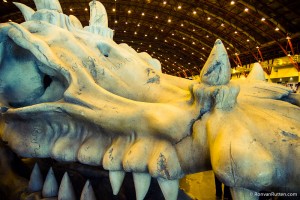 – It’s not big enough. EC1 was fine and we had ample movement, but EC2 was so packed we shuffled instead of walked.
– EC2 is huge, but having just the ONE entrance at the beginning isn’t very handy. We were at the other end of the hallway, and wanted to get fresh air. We had to walk (ok, shuffle) to the other side of the hall.
– Autograph lines for actors weren’t well defined. Meaning we ended up in an actor’s line.
– Virtual tickets is a terrible way to get autographs. Had a ticket with number below the current one and wasn’t allowed to join the line.
– Too busy (probably due to Stan Lee being a guest).
– Layout is terrible. Due to the high volume of tickets being sold at the door, the paths got clogged up fast. Limiting tickets to pre-sale would solve this or less tickets at the door would solve this. The queue to buy tickets (and I’m not shitting you here) was still massive when we went to get some fresh air at around. Insane. I later read about people standing in the queue for 2 hours and not getting in due to the convention closing.

In the end we missed out on getting Stan Lee sign something for us, but he had already signed about 1000 items and we had number 1400. He’s 91, so we don’t mind, let the man have some rest!

Having given the pro’s and con’s, would I go again? Oh absolutely. No convention is perfect. I’ve seen these and many complaints been voiced in the forums and on Facebook so I hope Showmasters does read the complaints and uses it to improve future events.

Up next: FACTS in October.