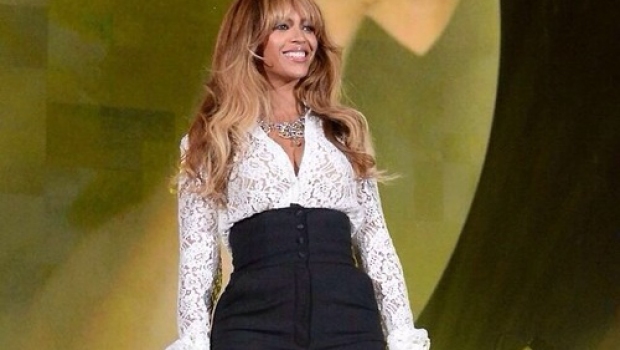 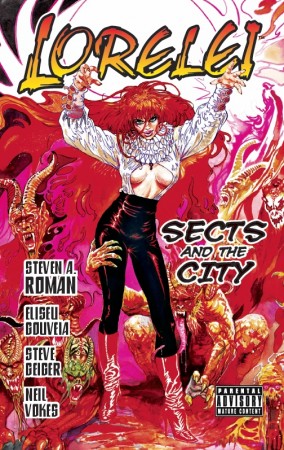 It was in 1989, twenty-five years ago, that my comic book character Lorelei made her small-press comic debut in the digest-sized Lorelei One-Shot Special. A redheaded, soul-stealing succubus inspired by Vampirella; Marvel Comics’ Satana the Devil’s Daughter; Bill Mantlo, Rick Leonardi and Terry Austin’s Cloak & Dagger: Child of Darkness, Child of Light miniseries; and even the 1980s TV series The Equalizer, Lori lived in a gritty, dangerous New York City and used her powers of seduction to take the souls of evildoers. Since then, she’s made occasional appearances, ultimately starring in Lorelei: Sects and the City, the critically acclaimed StarWarp Concepts graphic novel I wrote in which, in classic Vampi style, she battles a cult of religious fanatics trying to resurrect the Elder Gods they worship.

But more than her origin as a tribute to 1970s horror comics, it’s her costume that Lorelei is known for: the big hair, the red boots, the black, high-waisted tights, and an overly complicated blouse, with all those ruffles and folds and billowy sleeves. Or as Gray Morrow—legendary artist of Zatanna, Man-Thing, the Vigilante, Creepy, Eerie, Jonah Hex, Star Trek, and his own Edge of Chaos—put it, back in 2001, when I approached him about drawing a cover for Lorelei, Volume 2:

“I won’t draw it. It’s one of the most ridiculous costume designs I’ve ever seen.”

But from where, exactly, did Lori get that “ridiculous costume”? Would you believe an Ozzy Osbourne album cover? It’s true! 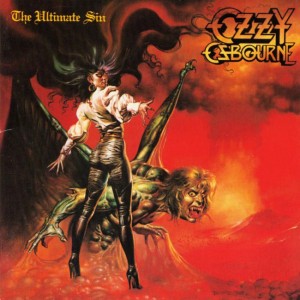 At some point in 1986, I’d been toying with the idea of writing and drawing a comic-book character that would be my tribute to Vampirella and other 1970s horror comics I’d read as a teen; unlike Vampirella, though, she’d be a succubus, because even back then vampires were oversaturating pop culture. I had a name for the character—Lorelei—but no idea what she’d look like, other than being a redhead. Then one day I walked into a Greenwich Village record store—it was either closed Revolver Records or It’s Only Rock N Roll, on West 8th Street; both are now long gone—and saw a poster of the album cover you see here hanging from the ceiling. Now I’ve never been an Ozzy Osbourne fan—I leaned more toward Alice Cooper in those days—so the fact that The Ultimate Sin was his new solo album didn’t really register with me, but that Boris Vallejo painting sure did—especially that demon lady’s costume…

By the time I got home, I’d decided that Lorelei would have an outfit just like that…except I couldn’t recall the exact details. I remembered a white blouse with big sleeves, and some kind of tights or tight pants with boots, but I’d forgotten the colors. And since Vallejo’s art focused more on the woman’s posterior (as a good number of his paintings do), I’d have to figure out what to do with the front of Lori’s blouse on my own.

Well, red boots to go with Lori’s red hair made sense to me, as did matching a pair of black tights with the white blouse. The billowy sleeves and harlequin collar were the final touches. The end result was sort of a gothy superhero costume. As for what to do with the front of the blouse, well, this being a 1980s horror comic starring a woman who uses sex as a lure to draw in her victims…when in doubt, unbutton the shirt and show off her cleavage.

It wasn’t until 1988 that I started drawing Lori’s first comic appearance, but once I’d locked in that “ridiculous costume” it was here to stay. And stay it has, now twenty-five years after Lori’s first published appearance in 1989. Gray Morrow—and all the other artists I’ve worked with who consider that blouse and all that hair to be a major pain in the ass—might not have been enamoured with it, but I like it just fine.

I’m not the only one, it seems. In September 2014, the third annual Global Citizen Festival concert was held in New York’s Central Park, and during a set by world-famous rapper Jay Z his superstar wife, Beyoncé, made a surprise appearance…in an oddly familiar outfit, from design house Dolce & Gabbana. It was something I never would have been aware of—my musical tastes lean more toward classic rock—if the news media hadn’t written numerous articles about the wardrobe malfunction that occurred when Beyoncé’s blouse popped open while she danced; at that point, it was kind of hard to miss the reports.

So here we are, in Lorelei’s twenty-fifth anniversary year, and apparently that “ridiculous” costume design has become a real thing. Well, all I have to say is, You’re welcome for the inspiration, Beyoncé and Dolce & Gabbana! Now where are my royalties? 😉 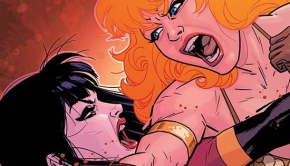 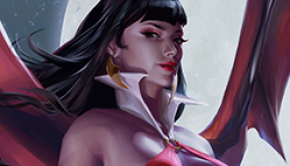