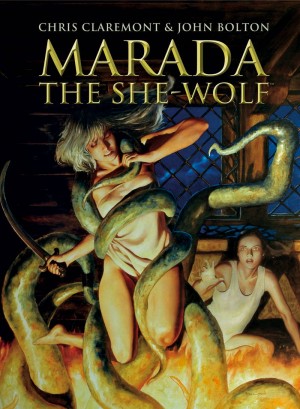 Hitting stores on November 12, 2013, comes the shield-shattering saga of Marada The She-Wolf – white-haired, blood-soaked swordswoman and mercenary, object of unearthly desire and descendant of Julius Caesar!

Chris Claremont is one of the best-known writers currently working in comics. His
work includes The Uncanny X-Men, Captain Britain, Fantastic Four and Gen13.

Descended of Caesar, and preceded by her legendary reputation as a warrior, Marada The She-Wolf follows Marada’s adventures across the Roman Empire. Together with her magical accomplice, Princess Arianrhod, they battle evil demons, wizards, witches and unearthly terror! Check out the trailer here