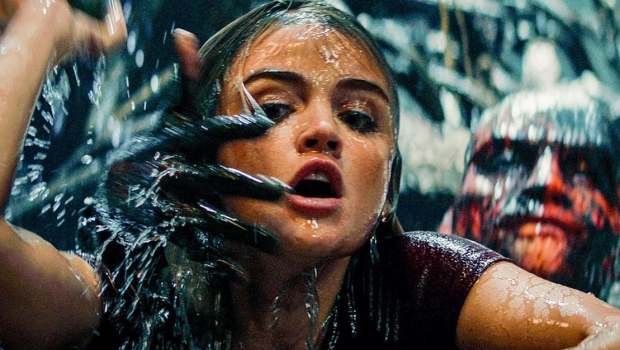 Several guests to Fantasy Island got there by winning a contest to the Island. They don’t realize that their lives are intertwined, and their fantasies are related to a specific event. The guests include businesswoman Gwen Olsen, (Q) a former cop Patrick Sullivan (Stowell) Melanie Cole (Hale) also the stepbrothers J.D. and Brax Weaver (Hanson and Yang). Maggie wants to relive the night that her fiancé proposed to her and she rejected his proposal. After she relives that night and accepts his proposal of five years ago, she awakens and discovers that she seemingly went back in time and now has a five-year-old daughter with Alan (Robbie Jones). This prompts her to want to change her fantasy, as she perceives she can go back, despite the Eddie Money song, and do it all over. There’s something else she wants to change, this despite the warning from Mr. Roarke that once their fantasy has started, they can’t change it and must live it out to its natural conclusion.  All the Weavers want is a giant rave party which begins as soon as they get off the plane. Patrick Sullivan wants to become a soldier like his father before him while Cole wants revenge on a high school bully.

I went into this film knowing absolutely nothing about it. As a fan of the original series I usually keep up on these types of revivals, so I was shocked that they even did a re-imagining of the series. I guess we can attribute that to poor marketing, which may also explain the lackluster box office. I was pleasantly surprised at the script to this film, there are some neat twists and the way the guest’s backstories intertwine made it a movie worht seeing. The performances, however, are a mixed bag. I generally like Michael Pena. He has some good dramatic as well as comedic roles and he stole the show in “Antman”, but this is the first time that I’ve seen him play the lead. He doesn’t do a terrible job, but he lacks the commanding presence of Ricardo Montalban. The series was rebooted in 1998 with Malcolm McDowell as the second Mr. Roarke, but I haven’t seen that incarnation so no comments on Malcolm in the middle (terrible pun, I know). In Pena’s defense, the constraints that the script demands are part of the reason why he isn’t as in command as Montalban, but he doesn’t quite succeed in the role of Roarke. He seems to be wandering around helplessly along with the other guests as opposed to being able to take the reins and be the leader the role calls for. I find him better as a character actor. The other weak performance in this film comes from Lucy Hale, who, at first is fine as the horny Melanie Cole, but later in the film, her character has an interesting arc and has to grow beyond just seeking revenge on a High School bully and she doesn’t quite pull it off as effectively as she should have. The rest of the cast is solid in what they’ve been given to do. Michael Rooker has an interesting role as a former guest trapped on the Island.

The film begins with each guest going off to live their different fantasies, apparently not knowing much about the other guests, but the pivotal event, which Gwen wants to change her fantasy to, brings them all together as they were all involved in that event. I don’t want to give it away here because it’s compelling to see how each character fits into that event.

My favorite of the individual fantasies has to do with Patrick Sullivan as he doesn’t quite become a soldier. After Roarke tells him to don his BDU’s he wanders up to the other soldiers, who don’t recognize him and arrest him. From there the soldiers lead him to the rest of the troop, which is commanded by his father. It’s here that he realizes deep down that he didn’t want to become a soldier per-se but wanted to discover the truth about his father. And I’ll stop there before giving it away. The plot does require a giant leap in the area of suspension of disbelief to accept the goings-on, but It kept me watching so I have to say that for me it was compelling. I will admit that the plot may be far-fetched for a lot of people, but I was intrigued, so I found myself enjoying it despite its misgivings. *** (8.3 rating)