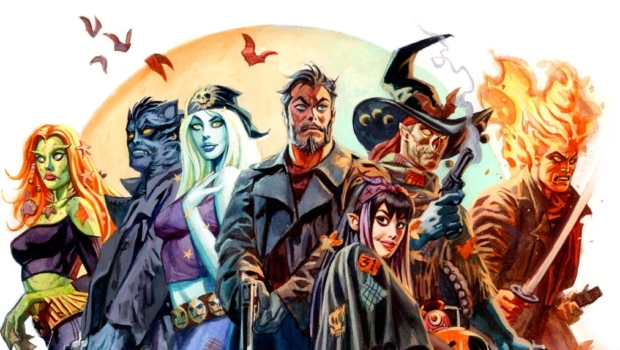 This “NOCTURNALS Art Portfolio by Dan Brereton ” Kickstarter project seeks to fund a high-quality Nocturnals Art Portfolio, collecting a group of recent illustrations, reproduced as 11×14 full-color plates. Doc Horror, Halloween Girl, the Gunwitch, Polychrome and the rest of the cast from the acclaimed crime/horror series are all here. 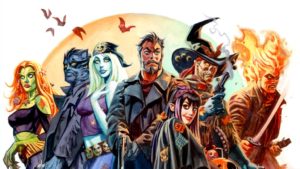 It all started with a love of the medium.

“I’ve always been fascinated with the portfolio format. My love of the illustration portfolio goes back to the days I would head to my local comics shop after school and gaze lovingly at the signed Frank Frazetta and Berni Wrightson portfolios from the 1970s- the presentation, the beautifully reproduced art, printed larger than any book or comic page, was a real treat. I treasure my small collection to this day and have daydreamed about the right project to one day produce my own.” Dan Brereton

That day has arrived. After a short sabbatical from ongoing work to produce the next Nocturnals graphic novel (a follow-up to 2017’s Nocturnals: The Sinister Path) Dan Brereton has produced a number of new, never-before-published paintings. All are larger than an original page of comic art, affording the artist more room to explore and create, free of the boundaries of normal comics storytelling and cover art.

Two separate editions, each signed and numbered, are being produced for this Kickstarter project :

-The Classic Sketched Edition is a limited signed subset including a special one-of-a-kind 7×10 sketch plate hand-drawn by the artist.

A Kickstarter exclusive, comes in a decorative box, with an illustrated interior pocket enclosing ONE monochomatic and SIX full color giclée printson Cold Press Watercolor Cotton Rag Fine Art Paper. Each giclée in the master edition comes hand-signed by the artist. A one-of-a-kind 11×14 hand-drawn sketch plate is included with each Master Edition. Also included is a signed cover sheet and artist’s profile sheet.

will include a 7×10 hand-drawn plate. the plate will bear the same design sigil as its companion plates, for a beautifully integrated look.

includes a special 11×14 plate hand-drawn by the artist. the plate will bear the same design sigil as its companion plates, for a beautifully integrated look.

A very limited number of 11×14 hand-painted watercolor plates supplants the sketch plate in the boxed Master Edition in the Master Watercolor reward. The Artifact and Trove rewards include a Watercolor Plate.

WHO ARE THE NOCTURNALS?

The Nocturnals are a band of monster hunters who have learned to function as a family while living on the outskirts of society, in a world where crime and the supernatural often intersect.

HALLOWEEN GIRL aka EVENING – charming, upbeat and spooky, Eve talks to the ghosts living in her toys and lives every day like its Oct 31st.

THE GUNWITCH- silent, deadly and undead, a gun-slinging revenant with two things in mind: protecting Eve and pulverizing Evil.

THE RACCOON- raised in a lab on a steady diet of crime magazines, when ‘Cleanhands’ got too big to keep caged, he became a notorious underworld scourge.

NYX- member of the monstrous and misunderstood Hemlock Clan, offspring of witch and robber-baron aristocracy.

The Nocturnals have appeared in comics, stories and graphic novels, RPG game and more since 1994. Dan was nominated for an Eisner Award for Best Painter for his work on the first mini-series in 1995, and has attracted a loyal base of readers over more than two decades. The latest graphic novel NOCTURNALS: THE SINISTER PATH was funded on Kickstarter and saw publication in 2017. Its available through your local comics shops or directly through the publisher, Big Wow Art, as well as the first Nocturnals collection.

Dan is currently working on the next NOCTURNALS Graphic Novel, an as-yet-untilted follow-up to THE SINISTER PATH.

Dan Brereton is the award-winning artist and creator of the monster/pulp/noir comic book series, NOCTURNALS. Along with creator-owned titles like GIANTKILLER. THE PSYCHO and THE LAST BATTLE, Dan has worked for most major comic book publishers on titles such as BATMAN: THRILLKILLER, JLA, PUNISHER, GOD-SIZE THOR, VAMPIRELLA, RED SONJA, LEGENDS OF THE DARK KNIGHT and countless more . Dan published his fourth art book, in 2014 Enchantress, his third with Publisher Big Wow Art and first funded through Kickstarter. Since then, Dan and Steve have continued to create more successful projects on Kickstarter, including the NOCTURNALS: THE SINISTER PATH graphic novel, and last Fall’s IN THE NIGHT STUDIO art book. Dan also created the monster girls trading card set CREEPING FLESH with SideKick Labs on Kickstarter. He’s currently working on the next NOCTURNALS graphic novel. Dan lives with his family in Northern California.

Dan Brereton is gearing up with April Solicitations: Nocturnals and Thrillkiller →