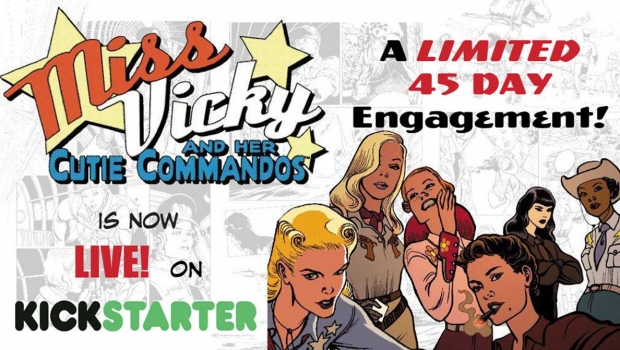 The creative team behind new comic project MISS VICKY & HER CUTIE COMMANDOS are celebrating. Ten days into the Kickstarter campaign to fund the project, donations have eclipsed the 75% mark, increasing the likelihood of the book making its planned Summer 2017 release. 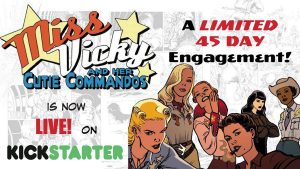 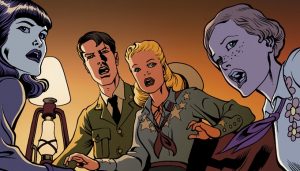 Sean Dulaney, writer of MISS VICKY, was especially pleased to learn of the project’s momentum. “I’m overjoyed. I’ve have a few friends who have done Kickstarter campaigns and they warned me that you are going to have lulls in activity. We’ve been fortunate so far in that the lulls haven’t been more than a day. Not bad considering there’s been two major convention events over the last 10 days. I think our girls have really registered with people and that has helped our progress.”

The “girls” Dulaney speaks of are the “Cutie Commandos” of the title. Six women recruited by the O.S.S. during World War II to entertain the troops by day and conduct espionage and sabotage missions behind enemy lines by night. Each of the women in the story based on classic pin-up iconography of the period.

“I discovered the work of Alberto Vargas as a kid and it really made an impression,” Dulaney said when discussing the inspiration for the project. “From there I really tried to study the other classic artists of the period like Petty and Elvgren. Mix in the comic art influences of George Perez, Wally Wood and Dave Stevens and a project involving strong, attractive women is only natural. And having Eliseu [Gouveia] on board for the art really brings it all together. His work so far really feels like the perfect marriage of Vargas and Perez.”

Humbled by the response to the campaign and reactions to the art released over the past few days, Gouveia said,” We’re gonna give our best to deliver the best, most gorgeous story our talents can muster.”

The campaign continues until May 30, 2017 with rewards that include variant covers by guest artists Stephen Molnar (Danger Girls, Star Trek), Ron Joseph (Micronauts, Seven Per Cent Solution) and Chad Hardin (Harley Quinn, Bloodrayne) and a limited number of sketch covers by Eliseu.

Please march with us: https://www.kickstarter.com/projects/452416420/miss-vicky-and-her-cutie-commandos-1