C4S with a preview to Preview: Army of Darkness / Xena, Warrior Princess Vol. 1: Forever… And A Day TP - Comics for Sinners
Previews 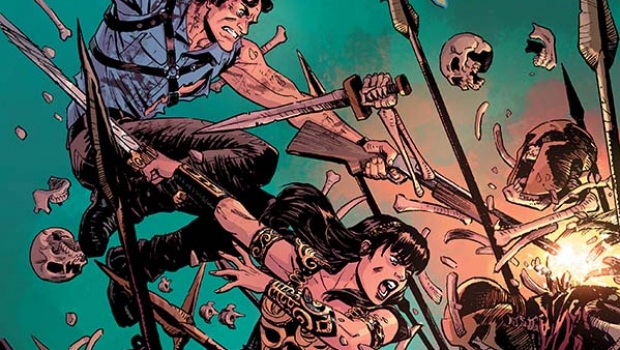 Dynamite Entertainment has provided C4S with a preview to Army of Darkness / Xena, Warrior Princess Vol. 1: Forever… And A Day TP, coming to stores October 11, 2017.

Xena, Warrior Princess, has toppled nations through the force of her will. She’s captained the most deadly pirate crew ever to sail the seas. She even turned her back on her past, seeking redemption for her darker acts alongside her partner Gabrielle. And yet, despite her propensity for defeating all odds, her thousand-strong army has fallen to an implacable and ancient evil. Her only recourse? To use the dreaded Necronomicon to summon Ash Williams – the wise-ass, butt-kicking, smooth-talkin’ demon-killer from the future – for aid! But how can Xena save the world when that chainsaw-wielding knucklehead’s every temporal mishap threatens to unravel time itself?