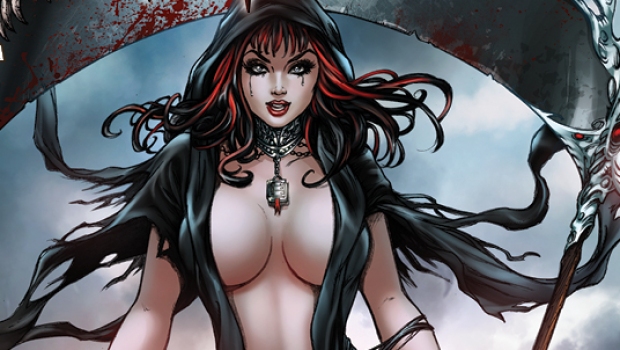 Zenescope Comics has provided C4S with a preview to GFT No Tomorrow #1, in stores August 28, 2013.

In the not so far off future, the battle between the forces of good and evil for control of the nexus has finally come to an end… but this uneasy peace is not meant to last. A new horror is born into the Grimm Universe more terrifying than any before. A horror whose name is spoken in hushed and fearful whispers. A horror more beautiful than the breath we breathe but as deadly as our last and final gasp: Keres, the Goddess of the Death!

From fan-favorite writer Raven Gregory (Wonderland trilogy/Fly/Dream Eater saga) comes THE WORLD’S MOST TERRIFYING COMIC BOOK! In a world where Death has gone mad, there may be…NO TOMORROW!