C4S with a preview to Preview: Jungle Girl: Season 3 #1 - Comics for Sinners
Previews 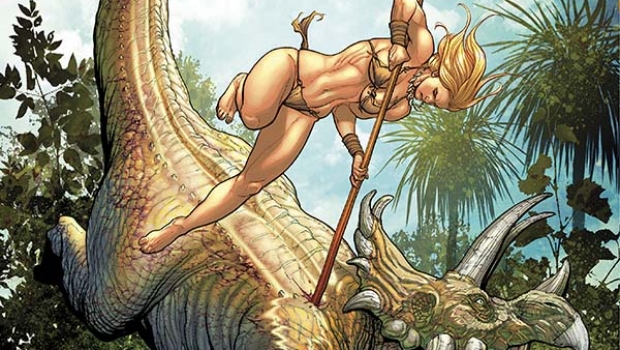 When we last saw Jana the Jungle Girl, she had escaped from an underwater city and fired a torpedo into the eye of a gigantic underworldly creature of some kind. Bad Move! Her father tells her that those actions have doomed the Lost World in which they all live —- and no sooner does he say that, then things begin to happen. A hole appears in the sky and flaming debris falls through. The jungle begins to burn… Jana and her friends are forced to turn a stampede of gigantic prehistoric creatures who are fleeing before the fire. Can Jana stop the stampede? Will she survive the displaced natives intent on claiming a new homeland? And what other alien materials will emerge from the hole in the sky?