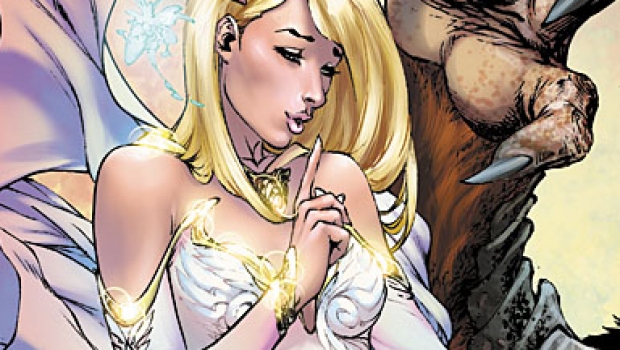 Aspen Comics has provided C4S with a preview to Shrugged #3, in stores today.

You think you¹re prepared, but you¹re not. You¹ve been decisive in your actions up to this point, but now things have been turned upside down. You feel you¹ve conformed your mindset and are ready to accept what you¹re about to experience, but you haven¹t. That¹s because SHRUGGED is back and ready to blow your mind!

Perspecta has a new dark ruler as Lord Slive revels in his takeover and now plans his attack on planet Earth. Barely surviving with his life, Magnuss, the ousted true leader of Perspecta, reaches out for help, but who will come to his aid? Meanwhile, Theo¹s girl troubles are heating up as he¹s torn between the three women in his life. Those may be the least of his worries though because something bad has happened to Ange and Dev, and Theo may not survive their new transformations!

Created by Michael Turner and Frank Mastromauro, with illustrations by newcomer Jonathan Marks and colors by Beth Sotelo, make sure to listen to the voices inside your head and pick up the newest issue of SHRUGGED today!