Prior to the trade paperback (graphic novel) of Sweet Lullaby releasing in March 2017, Darby Pop is releasing individual floppies digitally.

Issue #1 Synopsis: GOOD GIRL GONE BAD – Lullaby is a strong-willed, 2nd generation covert assassin, trained from a very young age by her father, Z. Typically, she adopts a new look and identity for each mission. And upon receiving orders to “terminate,” Lullaby does so with clever — and sadistic — precision. But, Lullaby’s black and white world is about to turn gray. And that means the streets could soon run red.

What’s It Like?
Sweet Lullaby is a spy-thriller caught in the crosshairs of such films as The Professional, The Big Hit, and The Long Kiss Goodnight; and such TV series as Nikita and Alias. Sweet Lullaby is an action/adventure series with covert-but-shocking homicides and dark humor — even as its main character struggles to balance a “normal” life with taking lives. 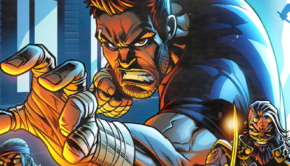