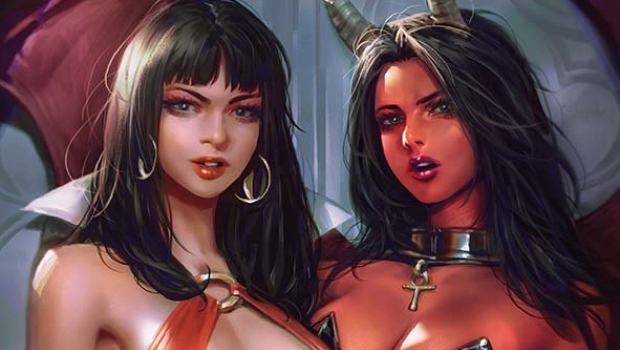 Dynamite Entertainment has provided C4S with a preview to Bettie Page: Queen of the Nile TP + Dejah Thoris: Winter’s End + Vampirella vs Purgatori #2 + Vengeance of Vampirella Vol. 1 TP, coming to stores (pre-order via brick store for support!!) on April 28, 2021.

Bettie’s back and in all kinds of trouble!

A low-budget time machine mistakenly transports Bettie to ancient Egypt, where she battles the High Priest of Amon Ra, assorted thugs, and a lovesick mummy twice her size. She wiggles and squirms and bumps and grinds to avoid their evil clutches, but she can’t avoid the inevitable: everyone falls in love with her and she manages to frequently lose her clothes. When Bettie falls for none other than Julius Caesar, the Roman general can’t decide between Bettie and his main squeeze, Cleopatra!

Dejah Thoris has saved her world from the catastrophic End Winter. Now she must help rebuild Barsoom to its former greatness! But certain factions see benefit in keeping Barsoom cold and dark. Dejah will need help, and she may find it in the return of her true love…JOHN CARTER!

Vampi, the Vampiri with a conscience and Tori, the lady-shaped creature who eats conscience. Working together? Not really. Working towards a common goal, while considering tearing each other’s throats out, more like! And that common goal is to stop Lilith and her near-infinite minions from having their rough, rude way with the entire human race. The stakes are big enough… and sharp enough. Everybody’s in… it’s time to ante up.

Originally debuting in 1994, Vengeance of Vampirella portrayed a more savage and feral look at the Daughter of Drakulon. Now, for the 50th Anniversary of Vampirella, original series writer TOM SNIEGOSKI (Punisher, The Goon) is back, joined by the incredible artist MICHAEL STA. MARIA (Fathom).

Humanity holds on, but barely, the playthings and slaves of a multitude of supernatural monstrosities that have made the earth their own. Mistress Nyx continues to rule the planet, her Chaos Lords reigning over the various regions of the world, but she is getting bored – there’s no one to challenge her! That is, until a small, but determined rebellion finds what could be their savior or seal their doom!