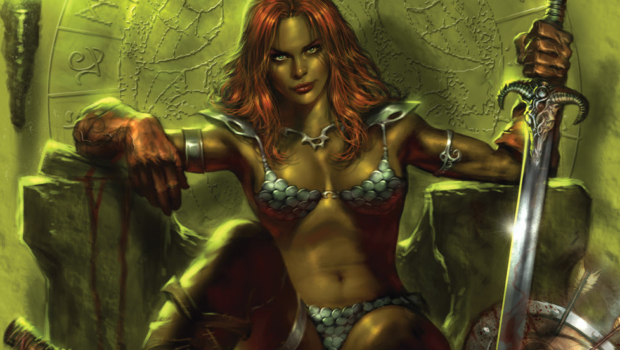 Queen Sonja Omnibus Volume 1 reprints the first 15 issues of that series. The 396-page paperback volume allows fans new and old to collect these stories affordably and binge them in a great format. In this volume, writers Joshua Ortega (Gears of War), Arvid Nelson (Rex Mundi, Warlord of Mars) and current Birth of the She-Devil scribe Luke Lieberman craft arcs depicting the unique challenges that face Sonja at this stage in her life. They’re joined by all-star She-Devil with a Sword artist Mel Rubi and Jackson Herbert. As well as a cover gallery, including a dozen paintings from superstar Lucio Parrillo. Pick up this terrific tome to read these tales of a mature battle-hardened Sonja atop the throne, dealing with threats from the outside and within.

“Know also, O prince, that in the selfsame days that the Cimmerian did stalk the Hyborian Kingdoms, one of the few swords worthy to cross with his was that of Red Sonja, warrior-woman out of majestic Hyrkania. Forced to flee her homeland because she spurned the advances of a king and slew him instead, she rode west across the Turanian steppes and into the shadowed mists of legendary.” — The Nemedian Chronicles

Queen Sonja Omnibus Volume 1 will be solicited in Diamond Comic Distributors’ August 2019 Previews catalog, the premier source of merchandise for the comic book specialty market, and slated for release in October 2019. Comic book fans are encouraged to preorder copies with their local comic book retailers. It will also be available for individual customer purchase through digital platforms courtesy of Comixology, Kindle, iBooks, Google Play, Dynamite Digital, ComicsPlus, and more!