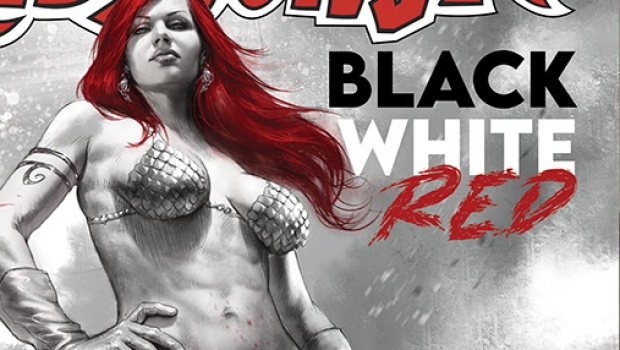 The most prestigious Red Sonja comic book ever debuts this July to heat up the summer! Red Sonja: Black, White, Red showcases today’s top talents and longtime legends with unforgettable and experimental tales!

The new prestige project pulls in the world’s greatest storytellers to capture the legendary Hyrkanian hero like readers have never seen her before. The series will be presented in beautiful black, white, and red to fully bring the linework and writing to the forefront, with exciting accents like Sonja’s iconic red hair and of course plenty of splashes of the blood of battle. The premiere issue has stories by Kurt Busiek with Benjamin Dewey, Amanda Deibert with Cat Staggs, as well as Mark Russell with Bob Q!

In the first issue, the legendary Kurt Busiek (Astro City, Marvels) returns to the Hyborean Age for his first ever Red Sonja story. Alongside frequent collaborator Benjamin Dewey (King in Black: Namor, The Autumnlands), the duo take readers to the Mountains of Night, a foreboding haunt that calls Sonja to it, in search of a precious artifact.

“I’ve gotten to roam around in the Hyborean Age before, and even wrote Kulan Gath in Avengers. But the one part of those classic comics that I never got to write was Red Sonja,” said writer Kurt Busiek. “So it’s great to have a chance to correct that, and do a full-on Sonja story, where we can showcase what makes her great — her quick wits, her anger and her unique way of dealing with the world’s rough edges. Plus, it’s always a joy to work with Ben Dewey, and we came up with a way to use the limited palette that I think will be very striking.”

Artist Benjamin Dewey shared, “Seeing the element of full color stripped away lets me and Kurt emphasize what the Red in Red Sonja means; it’s her hair, spilled blood, and any other special feature we want to showcase. It’s like listening to a great song when everything in the arrangement drops out suddenly to isolate the bass for a breakdown section, feature a soulful a capella vignette, or launch into a blazing guitar solo.”

Amanda Deibert (Wonder Woman) and Cat Staggs (Smallville) step to the plate with a mysterious adventure of crimson and ebony. The power couple bring an exciting level of close collaboration to the fierce sword and sorcery icon.

“I think most of us are drawn to heroes who fight for the underdog and at her heart, Red Sonja is a character who protects, defends, and gets revenge for those who cannot,” said Amanda Deibert. “That is deeply appealing to me as a writer.”

“I am really looking forward to the limited palette,” said Cat Staggs. “This kind of dynamic can create some striking imagery and make the impact that much stronger. It will be really fun.”

Last but certainly not least, fans of the She-Devil with a Sword will be excited to see the return of Eisner-nominated writer Mark Russell (Fantastic Four, Second Coming) and artist Bob Q (Way of X, Champions) to put their final stamp on the character with an unforgettable coda to their beloved recent run.

“She’s a warrior who’s been forced into violence because of her past,” said Mark Russell. “I think of her as sort of being like Clint Eastwood in the Outlaw Josey Wales. Someone who didn’t choose this way of life so much as it chose her, but now she knows nothing else. When I write her, I try to make space for that sense of fatalism.”

Collaborator Bob Q added, “You’d think that limiting the palette would be extremely limiting, but I find that when I have to play within specific boundaries that’s when technique, rendering approach, etc. starts to come into play, and there’s a TON of options in that arena.”

In addition to the best writers, the best artists, and the best action, the series will also feature some of the most impressive Red Sonja covers ever, in the same striking color pallette. The kickoff includes superstars Lucio Parrillo, Emanuela Lupacchino, and Phillip Tan.

RED SONJA: BLACK, WHITE, RED #1 is solicited in Diamond Comic Distributors’ May 2021 Previews catalog, the premier source of merchandise for the comic book specialty market, and slated for release in July 2021. Comic book fans are encouraged to preorder copies of the issue with their local comic book retailers. It will also be available for individual customer purchase through digital platforms courtesy of Comixology, Kindle, iBooks, Google Play, Dynamite Digital, ComicsPlus, and more!