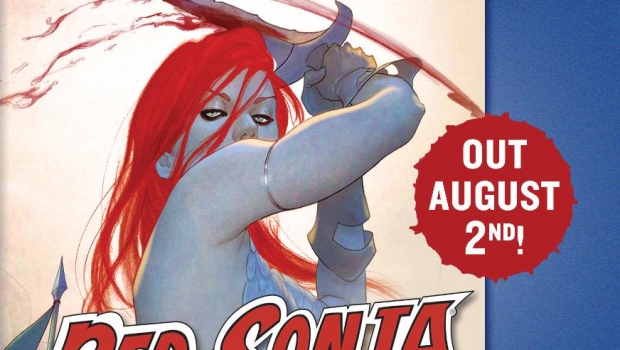 Red Sonja: Queen of Plagues THE MOVIE is almost here 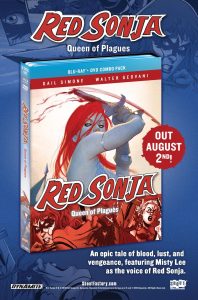 In the Red Sonja: Queen of Plagues film, the crimson-tressed heroine intends to pay back a blood debt owed to the one man who has gained her respect… even if it means leading a doomed army to their certain deaths! Who is Dark Annisia, and how has this fearsome warrior accomplished what neither god nor demon has been able to do: force Sonja to her knees in surrender? An epic tale of blood, lust, and vengeance, Queen of Plagues takes the She-Devil with a Sword from the depths of her own grave to the heights of battlefield glory.

Writer Gail Simone says, “Red Sonja’s my favorite character, and seeing my words and the dazzling art of Walter Geovani brought to life has been absolutely thrilling. It’s just a big, fun, sexy, sweaty epic with the best sword and sorcery character of all time!”

“We were fortunate to work with Gail and Walter as they had an incredible run on Sonja that had incredible critical acclaim,” says Nick Barrucci, Publisher and CEO of Dynamite. “That we could work with them to create this movie to reach a larger fan base is incredibly rewarding.”

“Queen of Plagues is one of the best books we have ever put out,” says Luke Lieberman, President of Red Sonja, LLC. “It is new canon. Gail and Walter did an amazing job, and Shout! Factory brought the pages to life!”

Shannon Kingston, voice actress on the film, says, “This was up there as one of my favorite acting roles! Getting to bring the words of the great Gail Simone to life was an honor and so much fun. Her writing is so relatable, and funny when it’s called for! I’m hoping to do the next two books!”

Red Sonja, the She-Devil with a Sword, is a fictional character, based on a high-fantasy swords-and-sorcery heroine created by author Robert E. Howard and adapted to comics by Roy Thomas and Barry Windsor-Smith in Conan the Barbarian #23 (1973). Her immense popularity led to solo appearances in Marvel Feature (1975) and a self-titled series in 1977. Red Sonja has become the archetypical female warrior of fantasy literature: fierce, capable, and stunningly beautiful. Since 2005, the character has had many successful ongoing series, miniseries, one-shot comics, and crossover appearances through publisher Dynamite Entertainment. The popularity of the character has led to a 1985 live-action feature film (starring Brigitte Nielsen) and appearances on merchandise including statues, busts, barware, t-shirts, and an upcoming video game.