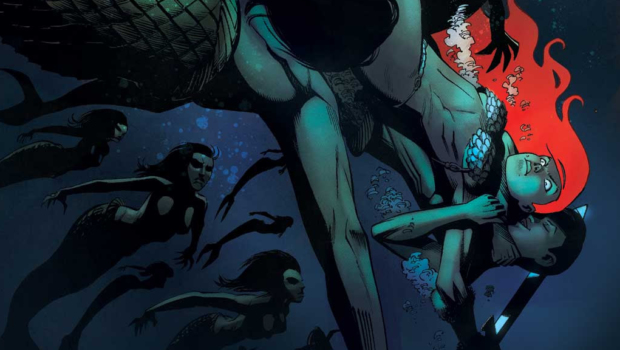 Dynamite announces an ongoing set of “Seduction” variants for every issue of the upcoming RED SONJA series from acclaimed artist Bob Q! Each cover will pit Sonja against classic mystical myths…sirens, nymphes, sorceresses, goddesses and more! As illustrated in a deadly yet seductive style, as only an artist as Bob could do it.

“Bob Q is one of the most dynamic and prolific artists in comics,” says Red Sonja series editor Nate Cosby. “From THE GREEN HORNET ’66 MEETS THE SPIRIT to JAMES BOND ORIGIN to THE LONE RANGER, Bob’s unique art and color are a pleasure for the eyes, and his take on Red Sonja covers will be a sight to behold every month!”Fans should ask their Local Comic Shop whether they ordered copies of Bob’s cover for issue #1. Final Order Cutoff for the issue will be Monday, February 14. Fans and retailers can now order RED SONJA #2, by Mark Russell (The Flintstones) and Mirko Colak (Conan), in the March 2019 copy of Diamond’s Previews.