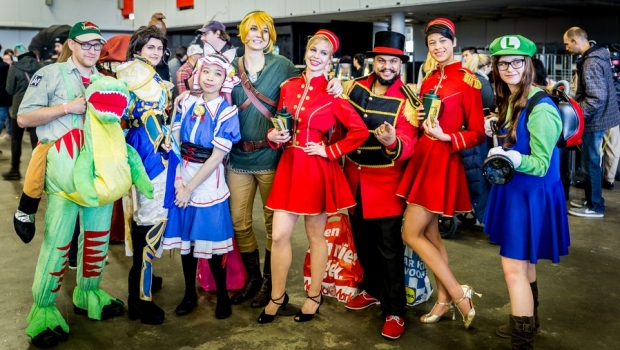 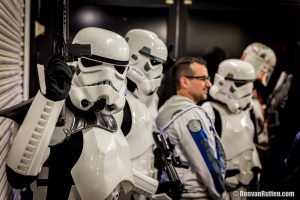 These days retro is a hot topic, no way around it. TV Shows from the 80’s and 90’s are being rebooted (MacGyver, Transformers, Baywatch), memorabilia is getting sold at record highs, and stars from that era are in popular demand at conventions.

But all this attention for the good ol’ days and there are no conventions that focus on that, so RetroCon stepped up and decided to celebrate all things retro and set up shop in Ahoy, Rotterdam. Did they succeed? Yes and no.

The show did have a slight delay in starting due to a power failure but this was fixed quickly and 20 minutes later we were allowed into the main hall.

Yes, it was small, deal with it. It was set-up to allow for enough people to walk around. Just a good mix of comics, movies, toys (must not buy all the GI Joe toys), and even a dealer selling soundtracks. Having helped out at conventions I know you can’t demand the dealers to bring just retrostuff, but as a dealer, would it kill you to at least try? For example Dirtees did great selling all kinds of retro themed shirts. House of M Comics brought all kinds of old comics to the floor. But I wish more dealers would have thought about what they were selling.

There was also a nice selection of artists, all from the Rotterdam area (and one from Amsterdam, but we’ll forgive him for that ;). No international artists which was a pity, maybe next year? The placing of the artist alley was right in the middle so they had enough people to look at them work and talk to the artists.

We must not forget the cosplayers. I was amazed at the amount of cosplayers at this event, lots of anime but the best I’ve seen today was a fantastic Star-Lord complete with walkman and dance moves (and who was one of the winners of the competition) and several Overwatch cosplayers. 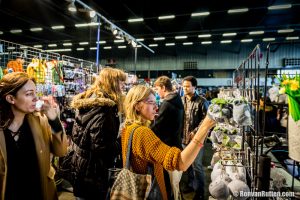 – The room was set up nice, wide pathways so that even at it’s busiest, there was enough room to maneuver.

– Nice and busy. According to the PR person I spoke they had about 6000 people attended the event.

– Super-friendly staff! Even if they don’t know something they’ll do their best to figure out the answer or find someone who does. Seen other cons fail utterly with this aspect.

– Great set up by Rotterdams own museum of comics upstairs with original comics and very old movie posters. Even if it was a bit hard to find.

– No signage outside of the venue. Inside there was one banner pointing to the Retrocon section, but that was it.

– The other halls (movieposters and cosplay show) are too far from the main hall.

– Price was a bit high

All in all I enjoyed myself. It was quite small but hey, they just started out. I’m really looking forward to what they are going to pull out of their hat come November. They have a stiff competition with the upcoming Showmasters’ Comic Con Rotterdam. Yes, the name is similar but different company. Quite confusing. So I did some research into this. It seems that the company that organises Retrocon has trademarked the name Comic Con Rotterdam within the Benelux. This means that Showmasters would be infringing on their trademark by using the name Comic Con Rotterdam. I’m no specialist in these things but if it is proven that Showmasters is in the wrong, things could get interesting.

The thing I liked most? It was small but has potential for organic growth. Conventions like San Diego are huge now but started in a similar fashion. This way we can see Retrocon grow to two halls next year, maybe even three?