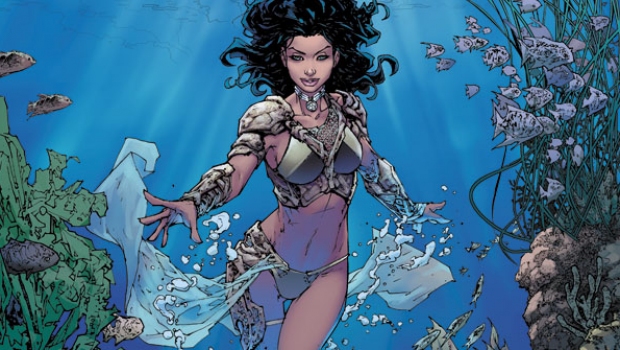 Drumming up a new story-arc… the new writer, Blake Northcott, is up to this challenge and manages to squeeze in a lot of modern, contemporary issues, problems and phenomena like the impact of social media, stupidity of humanity and overzealous zealots spewing hate and destruction.

As Aspen Matthews gets a call from boyfriend Chance, talking about an underwater sinkhole emitting strange sounds, she gets out in the water to investigate and discovers yet another adversary. It seems that the underwater folks have zealots of their own, that have cult-following of their own and spew hatred of their own.

It almost reads like a parallel to modern culture, perhaps even modern politics and I would have to read more of the story in upcoming issues to see what will be the endgame here, but I am sure the road to these answers is worth the admission.

So, as Aspen battles the new baddies called Typhons, we also get a really great re-telling by Aspen herself which almost feels like breaking the Fourth Wall at times. I really enjoyed the intelligent yet chill fashion in which Aspen and her reporter-friend Tyler keep throwing remarks, insights and stories combined with interpretations at eachother. It makes for a great read instead of just an action-filled visual spectacle… which it ALSO was, so that is a big plus to the writer.

New artist Marco Renna marks this a strong debut as he mixed action, with quiet scenes, and coral-designs with the mundane of an interior look at a condo. And since Aspen is bound to go swimming (or fighting) in bathing suit, it must be noted that Renna can also handle the sexy.

There is one thing that keeps bugging me though… why is there carpet inside Aspen’s home and not tiles for instance? I mean: a beach-babe is sure to bring in a lot of sand, so carpet would be the least favorable floor-padding, no?

Other then that: I am soooo ready to jump on board of Fathom’s newest series!