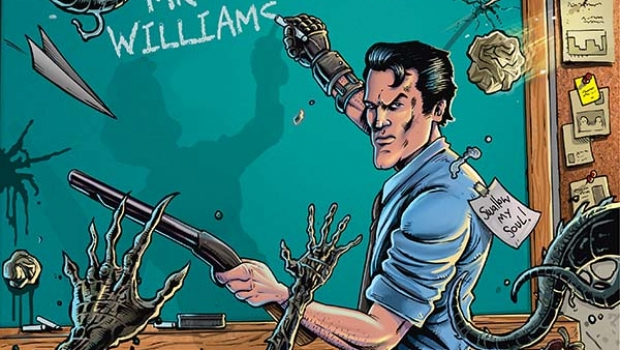 Review: Ash Vs The Army of Darkness #1

Issue one opens with everyone’s favorite Deadite hunter teaching High School. The character of Ash is in top form as one student asks about 14th century Europe, to which Mr. Williams responds: “Great, that’s easy: It sucked!” 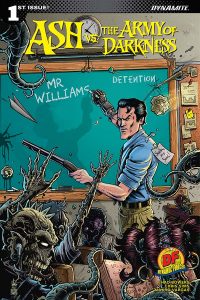 The whole issue takes place in the halls of a high school as Ash plays substitute teacher to his Alma Mater. The humor builds to a bloody climax of cartoon violence just like the original Sam Raimi trilogy and Ash must deal with one of the strangest Deadite creatures he’s ever encountered.

The Creative Team:
Chris and Chad lead Ash on one of the most bizarre adventures of his Deadite hunting career. The Deadite in question can only have come from a biology class as it’s larger than life form tries to get the better of Ash’s student body. The students’ lives are at risk and it’s up to Ash to protect them as they have never encountered a threat of this magnitude. It’s a fun filled, energy packed issue that fans of the franchise are sure to love. Great stuff.
Vargas art continues to impress as he builds a world of cartoon violence that can only be imagined by comic book readers. A scenario that wouldn’t be easy to film convincingly even in today’s CGI dominated world of movie making. It could be done, I suppose, but I don’t know who would get it right, outside of Raimi himself. The main Deadite in question is hilarious and Vargas captures him expertly in the showdown with Ash.

In Conclusion:
Watching Ash try to teach his history class is funny as the students try to relate to his unorthodox style. The students themselves have all the classic range of a teen comedy like Fast Times at Ridgemont High or Clueless. There’s the nerds, the jocks, the goth chick and the popular kids. Ash is shocked to discover that the popular kids actually study and are trying to get into college, something that didn’t happen when he was in school. Ash and his classroom are being monitored by a higher power as they witness and record his ultimate battle with an amphibious Deadite. It was an easy read and highly imaginative story telling. I loved it. We learn that the attack from this creature was no accident and actually has a purpose to being there. To be continued. ***1/2 (8.6 rating)