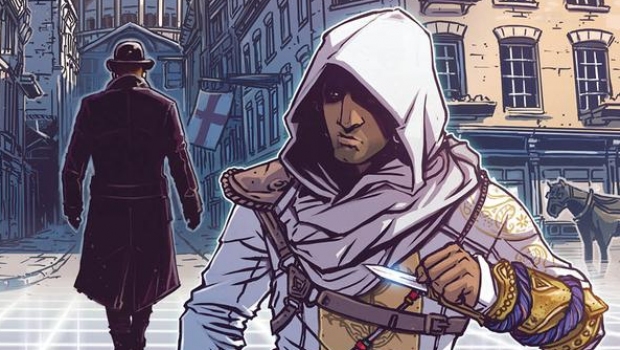 Visit the streets of Victorian London and discover why Tommy Greyling has traveled across the seas to search for a murderer, and the secrets his victim held so close to their heart. Teaming up with the Assassins Evie Frye and Henry Green, he sets out on a quest to uncover the mystery that has changed the world! 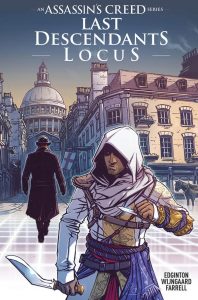 The fun thing about this story that you can read it on its own but also make sure to read the forthcoming Scholastic Young Adult Novel series, Last Descendants by Matthew J. Kirby, launching August 2016, with which it ties-in and then go back to revisit the Victorian London setting of Assassin’s Creed Syndicates , the 2015 Assassin’s Creed game, with the stars of that game, the characters Evie Frye and Henry Green.

The story revolves around Sean and his trips in the mind-memory-DNA-machine Animus as he probes the mind of his ancestor Tommy Greyling – a Pinkerton agent-, who is determined enough to cross the Big Blue in 1872 to find the murderer of his friend as well as discover how the Templars and Pieces of Eden, and also a Precursor Box and pages of the Voynich Manuscript all tie in together.

Writer Ian Edginton makes sure this road-trip journey is a fast-paced chase with Greyling being just one step behind the murderer during the complete series, and also making sure famous character Mark Twain is also a part of the Creed-universe even.

Artist Caspar Wijngaard follows the pace of Edginton ‘s story and although he is a good artist, the story somehow never leaps above “a good read”, but I fear that just showcases my own lack of mustering the complete Creed-universe and not wanting to read the books following up to this book.