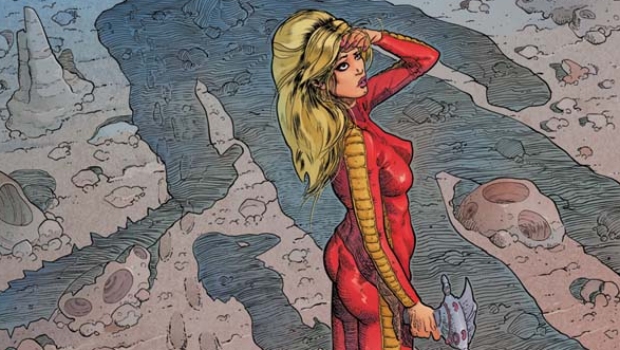 This issue starts with Barbarella and Vossamin arriving on Earth but are unfamiliar with the customs. A police officer walks up to them and they mistake his line of questioning for a proposal of sex. Vossamin contemplates leaving this time period on earth, but Barbarella reminds him that the Glains are right behind them and they have to complete their mission of putting the hapless earthlings back in their own time line. 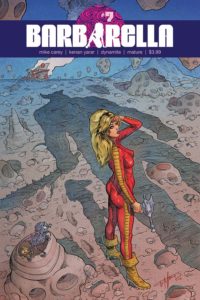 Mike Carey milks the fish out of water scenario for some great laughs as our heroes try to fit into earth culture of the 1930’s. He leads them to a clothing store in order to find more appropriate attire for the period as their skin-tight spandex is drawing attention that they don’t want. When they finally blend in they find it difficult to find what they’re looking for as the people they talk to think they’re half wacked. The antagonists find a way to track down Barbarella and Vossamin and that’s when the fun really begins. This is a good read and great stuff includes the arrival of the Western-clad Glains in downtown New York circa 1930’s and the same antagonists arrival at a speak easy. I had a lot of fun with this chapter of the story.

Kenan Yarar has a handle on our sci-fi siren and her topsy turvey universe filled with strange characters and the strangest ones of all are the earthlings. The art is simple lines and that gives the story a fun look as we traverse through space and time with our protagonists. Highlights include the appearance out of thin air of the space creature that our heroes are tracking and Barbarella with Sally-Anne Glain operating on the creature in question.

This final issue in the story brings us to the wind up of the journey and all questions are answered. It is a satisfactory ending and we finally learn why the “monster” was behaving irrationally. And it was for good reasons. This comic is totally unique in it’s set up and finale. A highly satisfactory read to say the least! **** (8.7 rating.)