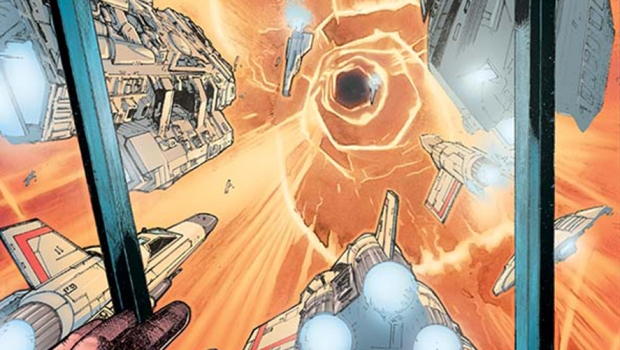 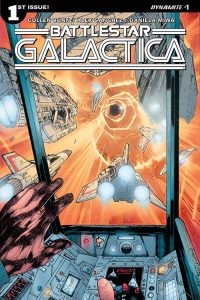 For this series Dynamite has gone back to the original ABC-TV show instead of the newer version from the sci-fi channel.I am pleased with this because, even though I liked the sci-fi channels take on the classic show, this one reminds me of my child hood. This issue starts with the Galactica in the middle of a major battle with Cylon forces. The only way to break free is to navigate through a black hole in space. Adama is rendered unconscious where he meets someone that he had encountered previously and links to the classic episode Hand of God.

I’ve always enjoyed Cullen Bunn’s stories and I’m glad to see him covering this series. His execution is, as always, flawless as he skips taking us out of the frying pan and we are taken directly into the fire. Bunn links this issue to other episodes of the classic series, proving that he’s a fan and he’s probably had this story in the back of his mind for some time now. I’m glad Dynamite saw fit to let him release his inner Galactica demon.

Alex Sanchez pencils are worthy of this story as he captures the likeness of our heroes spot on. Not having an inker on this title gives it a surreal feel that goes along with the dream like nature of the story. When we go inside of Adama’s sub-conscious while he’s still un-conscious is the highlight of this issues artistic mood.

The Galactica and other ships are screaming towards the black hole in question of this issue. In the very front are a pilot’s hands, I’m assuming Apollo’s, with one hand on the controls and another covering his face against the glare. It’s an energy filled adrenalin rush as we are led into the black hole, as well as this issue.

Once our protagonists escape the attack through the black hole they have no idea where they wound up. They speculate if any humans at all have ever been here when Apollo comes across a planet that is surrounded by derelict space ships. It reminds me of the old Star Trek animated episode: The Time Trap. When Starbuck and Apollo land on the planet the inhabitants treat them as lifesaving gods that came down from the heavens. In the meantime, the Cylons are hot on the Galactica’s tale. What happened to the graveyard of spaceships surrounding the planet? The landing crew have found what they believe to be a crash site. But it had to be a huge ship that made that crater. Apollo postulates what kind of ship could have made that crater? Where did it come from? Were there any survivors? A nice twist at the end will guarantee continued readership. To be continued.