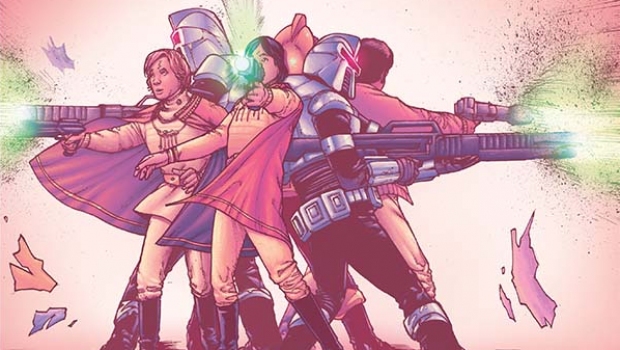 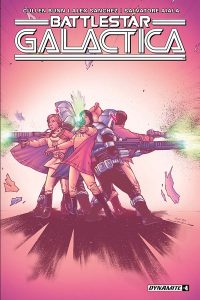 Writer Cullen Bunn borrows heavily from Star Trek lore in this BSG title. The idea of Baltar being stranded on a desolate planet by Adama ala Khan Noonian Singh in the episode Space Seed and the Cylon/Human hybrids called Meclons are very reminiscent of the Borg from the Next Generation. However, that’s where the similarities end and a compelling story begins. I like how Adama must deal with being in a coma and is forced to play mind games with count Iblis. It gives this mission a sense of urgency. Having been rescued from the planet, Baltar is now on the bridge of the Galactica and is giving advice to Col. Tighe.

Cullen Bunn keeps the tension high throughout this issue. Baltar on the bridge giving advice to Col. Tighe, can he be trusted? He must be leading them into a trap, or is he? Apollo entering Adama’s mind to confront count Iblis. It’s the showdown that this issue calls for but will Apollos succeed? I love how the tension and suspense gives way to action as the Seraphs launch an attack on our heroes. I love a good mystery and Bunn keeps the twists coming so that just as soon as you think you know what’s happening the tables turn. The Best chapter so far in this torrid tale.

Alex Sanchez pencils serve to compliment the action and the fact that there’s no inks in this story add to the surreal dream like state which is so effective in this Tale. I enjoyed the space battles a lot and the scenes inside Adama’s subconscious come alive especially when Apollo enters that world.

It’s a simple, yet effective cover that I enjoyed overall. There’s a pink hue which helps the surreal feel that the reader will get when they open the pages to Bunn’s masterpiece. Apollo, Starbuck and Boomer are forming a circle with two Cylons, side by side with their mortal enemies. They seem to be firing at a common foe. The enemy of my enemy is my friend, to quote an old cliché. This cover tells the reader all they need to know as both Cylons and Humans are forced to team up to face a common enemy.

Each chapter in this story is better than the one before it as Bunn keeps our pulse racing as we race toward the conclusion of this issue and the promise of better things to come in the next chapter of this adventure. Will Adama come out of his coma and if he does can he shake the influence of Iblis. What is Baltar’s ultimate motivation as he continues to give the Galactica advice?

I love what the creative team has done so far and can’t wait for the next issue. ****