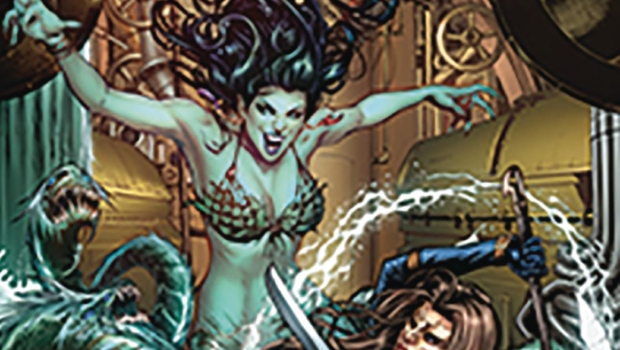 Issue three begins with our hero coming to and not knowing where she is. A mysterious lady that calls herself Patricia Otts promises to answer all her questions as she leads her on a tour of the facility. Belle learns that she’s in some kind of submersible weapons manufacturing plant and Patricia’s secret is a personal one that she may not want to deal with! 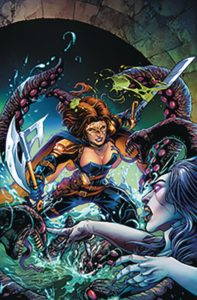 Dave Franchini takes his time with this issue for some much-needed exposition, but it isn’t the boring type of exposition which states the obvious. Oh no, this chapter does a good job of explaining what’s gone on before and remains fresh and exciting. The action picks up later in the issue and it’s worth the wait. Great stuff includes an attack by this month’s villain where Patricia thinks she’s a bad ass but is dragged to safety by Belle. Plus, Patricia retaliates and shows no fear. All in all, a busy issue with a lot of revelation.

Bong Dazo heats up this issue by showing off his artistic talent, first with brining us aboard the submersible then comes the fight scenes which are incredible. Highlights include the splash where this month’s villain shows up to wreak havoc and our fearless femme fatales get into a knock down drag out of epic proportions. Another great issue in this introductory saga of Belle the Beast Hunter.

If you’ve been following the saga from issue one then this is a must read for you, if this is your first issue with Belle, it’s a good one and should bring you up to snuff with the character. The denizens of the pit are contemplating what went wrong, Romanius and Becarrion have fallen. This month’s villain may show promise, but when we see what’s coming next…to be continued! *** (8.3 rating) 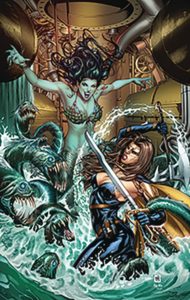