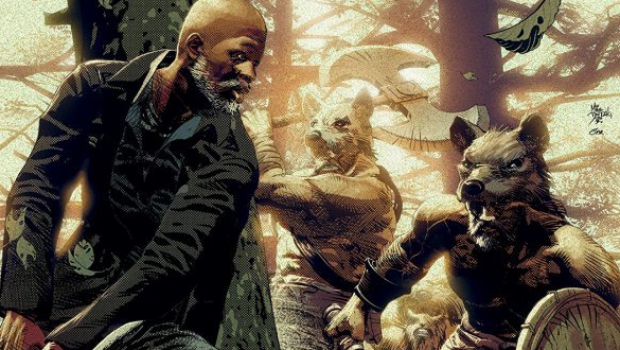 This issue opens with the Demon King arriving through the portal and demanding that his army brings him the head of Berserker! Then the battle begins right away with enough guts and gore to please any fan of ancient warrior battles.

Jeff Lemire is one of my favorite writers and I’m loving his new barbarian. The Berserker is blind with rage since his wife and kids were killed. He’s kind of a Hyborian age Punisher with revenge on his mind. His hatred for the children of the mist is what motivates him, and he won’t rest until he’s found what we would call street justice in today’s vernacular. He and his “Buddy” are attacked by the Demon King and the Demon King thinks that the Berserker’s “Buddy” is just another weakling mongrel, easy to kill, but “Buddy” has a few surprises up his sleeve. Great Stuff includes the Demon King’s realization that his magic doesn’t work in this world as it does in his own and the Berserker’s show of compassion for his new friend.

Mike Deodato Jr. is the perfect artist for this title. In fact, so many pages of these 40 are simply his artwork to be admired, with little to no dialog. His illustrations keep us glued to and admiring each page even with no words to read. It’s barbaric warfare in all it’s artistic glory! Highlights include the splash where the Demon King unleashes everything he has on Berserker and the final splash when Berserker and Buddy ride off …

Since the rights to Conan went back to Marvel, Dark Horse decided that they needed their own barbarian and thank God they did! The Berserker is an excellent title that would make Robert E. Howard proud. Lemire and company pull no punches and give us a savage warrior out of time and place. The highlight is the chemistry between Berserker and Buddy. Two strangers in a strange land that are loners that finally find friendship. Both have lost loved ones and needed to overcome their grief. **** (8.8 rating)