As the Big Bang Theory returns for a ninth series of hilarious nerdy geekness, we bear witness to the reprocusions of Sheldon’s decision to leave to find himself, as well as Leonard and Penny’s eloping to Vegas. Meanwhile, Howard learns more about his love for Bernadette in the wake of his mother’s death, and Raj and Emily also get the upper hand.

It really is all about relationships, about growing up and about cause and effect in this S09 and it keeps getting strong ratings and in a TV landscape where long lasting series are rare and difficult to keep up and running, The Big Bang Theory is defying all odds and managed to survive for a full nine seasons with a 10th coming soon. A feat for sure, especially since at one time talking about superheroes and reading comics where not-done in ‘normal’ circles and especially not once you reach voting-age. So kudos to the new pop-culture where it is cool to experience the comic-merchandise to the full extend!

Back to BAZINGA S09… with the fallout of Season 8 a few major changes were made. Sheldon coped with begin dumped by Amy despite him working up to a real proposal. Then we had Leonard and Penny we eloped and got hitched and now need to decide if this will work even though it was done drunk.

Due to these grownup questions the show becomes more drama and less ‘fun’ as the tonal shift is very apparant in the first half of S09.

Sometimes however the tonal shift and the drama became tiresome as we actually needed more laughter at times. When you look at Leonard and Penny’s storyline you also – as a fan- have to think about how Leonard came to his proposal, about the cracks in their relationship and if he really wants to be with Penny or if he only wants  cling to a pretty girl… important decisions.

To bad the writers of Bazinga decided to brush those questions under the rug and despite the fact that it remains a lingering issue, the S09 did not really took advantage of this drama.

This kinda wrapped up the first half season, leaving the rest of the (albeit lesser) stories to revolve around Howard’s struggle with his post-astronaut blues. Bernadette surprise bun in the oven, was a nice yet inevitable romantic drama story but only the future will tell how a baby can up the ante in S10.

And then we still have Raj… although he has the best potential for greatness he becomes rather dull and irritating. Even the love triangle did nothing much more then damaging the characters as if the writers just did not ‘feel’ it really well.

All in all the Big Bang Theory started out great, as it took a rather darker approach to the characters and delivered a nice resolve and conflict between Sheldon and Amy. Too bad the rest of the season was a tad too bland. Not that it was not fun to see all episodes as by now we really care about the characters and are eager to get into S10 with all the nerds and geeks we can turn normal people into! 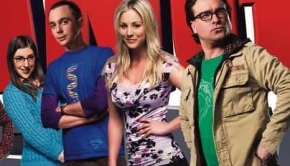