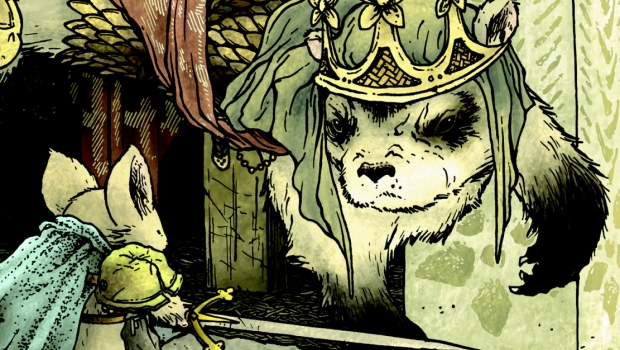 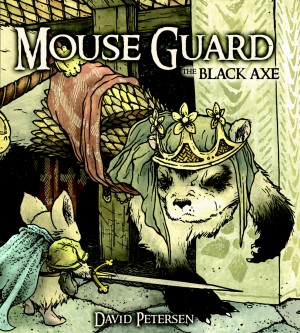 Legends of the Guard series; Mouse Guard: The Black Axe is the third volume of David Peterson’s creation which has been an epic adventure ever since it was first published and a fascinating epic anthropomorphic fantasy adventure if you ever read one.

The squary format of the book makes the large panelling read like a storybook, but in reading and in immersing yourself in the world David Peterson managed to create and share with readers, you will discover it is much more… MUCH more then a mere storybook we now know of.

Peterson put in layers and layers of details, making each part of the world seem believable, from the talking mouses and ferrets to the feathered beasts to the use of utensils like a human-sized fishing hook, which does not feel odd even! The visuals are astounding in that every detail is thought through, so I can imagine Peterson in two ways actually. One in which he will painstakingly map out each panel and its details, researching, plotting, contemplating, sketching… and another one in which he will just write and draw and let all the magic come flowing out really.

In BLACK AXE we see a prequel to the already published story, in which mice struggle to live a regular life, with the Mouse Guard being guides to accompany travellers from one place to another. One lone Mouse Guard is guarding the shores while a distant kin comes to visit him, telling him he is of the ancestry of the Farrer, the blacksmith who forged the mythic axe. The Black Axe holds mystical powers or at least is a force to be reckoned with and they set out to places unchartered, over seas no mouse ever sailed across to return with trophies as well as devestating losses.

The book is filled with friendships, action, acts of heroism and treason alike. It is filled with amazing adventures and like a rollercoaster it propels itself one loop into another.

Do not do yourself short. Get these stories!
And come back to thank me for telling you about it!
Then go thank Titan for publishing it and please send David Peterson a message to tell him thanks as well.