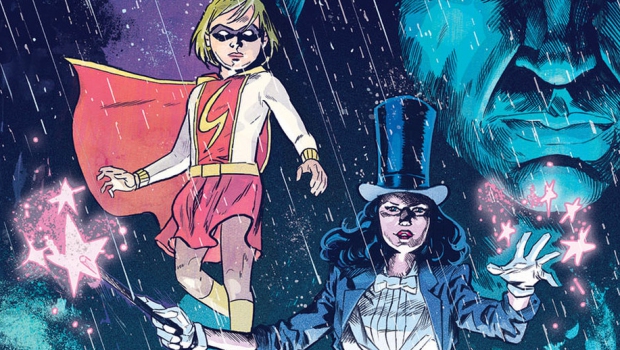 (to Zatana) “I thought I smelled cheap magic.” – Dragonfly.

This issue begins at the Hall of Justice in Metropolis. The heroes from the Black Hammer universe are descending on the building, but these universes heroes catch up to them and they are not happy. They think Abraham and company are responsible for the disappearance of their comrades.

Jeff Lemire is bringing this story to great heights and this issue shows the tension mounting more so than in previous issues. Gail has let Zatana bring out her true self and she feels liberated by it. Her teammates, however, are aghast by her appearance. Lemire is developing these characters and their relationship to the Justice Leagues universe in a fine fashion. One of the things I love about everything Lemire does is his character development. Our heroes learn something new about themselves in their interactions with others. Great stuff includes the appearance of yet another important DC guest star and Barbalien’s continued insistence that Martian Manhunter isn’t a Martian, some jokes just never die.

Michael Walsh continues to have fun rendering the characters from both universes and makes their interactions look seamless, just like in the story, it’s almost natural for both teams to be in their opposite universes. Highlights include the first appearance of this issues DC guest star and the splash where both teams are about to attack each other.

Jeff Lemire is one of my favorite current writers. He can take characters that are mundane on the surface and make them seem quirky. These heroes are grounded in their own reality and when something happens to upset the status quo it shows in their reactions to their individual realities as well as the reality that they wind up in, which is different than what they’re used to. The heroes demand that Mxyzptlk restore everyone to their proper universes and he agrees! Provided that… to be continued. **** (8.9 rating)